LA VERNE, California, November 8, 2017 — You have to love coach Rick Koch. The guy is an eternal optimist. He’s the first one you want on your team. If Amelia Earhart went down on his watch, he’d still be looking for her.

For him, if the road is too easy, he believes he is likely going the wrong way.

That’s why he fits the Bonita girls varsity soccer team so perfectly. The varsity girls didn’t win a league game last year in his first year at the helm. And it’s been three years since the girls have had a league win.

Yet, in the first week of full practice, Koch has a smile on his face. “I think we’re going to sneak up on some people,” he said, watching his players scrimmage through an intrasquad game.

The roster still isn’t settled, but Koch likes what he sees.

Koch had to travel miles to reach California from Washington State, where he grew up playing soccer. After arriving in the golden state, he coached at Azusa Pacific for seven years and two more at crosstown rival San Dimas High School before landing the top job at Bonita.

Despite Bonita’s recent win drought, he couldn’t have walked into a better situation. He has two daughters, both juniors, and one, Kendall Caron, is on his current team. And he doesn’t have to worry about criticism that she made the team because her dad is the coach.

“She made the team as a freshman before I got here,” Koch said.

Besides being an optimist, Koch has shown he is also a reasonable and sensible coach. Instead of cutting down the roster right away after last week’s tryouts, he’s letting his girls battle on the field a few more days to nail down those last few remaining roster spots.

“Instead of picking them after five days, I thought why not give them another good look,” he said. “Sometimes a coach’s judgment can be premature.”

For those girls who will eventually be sent down to the JVs, many may still have the opportunity to see varsity time. In all of Koch’s years coaching, he has never gone through a season injury-free. One player that he called up last year even went on to letter.

While Koch and his team have a lot going for them, one ally they don’t have is time. The first scrimmage is Nov. 21, and the opponents Bonita has lined up in pre-season won’t be easy. They’ll face Rancho Cucamonga, Los Osos and Chino Hills, all tough foes. And then there’s the regular season with the likes of Claremont, Glendora and South Hills ready to do battle.

“It’s challenging, but you have to keep positive,” Koch said. “When our girls put it together, they can play.”

Despite Bonita’s brutal schedule, Koch believes in his team.

“I think we’re going to surprise some people.” 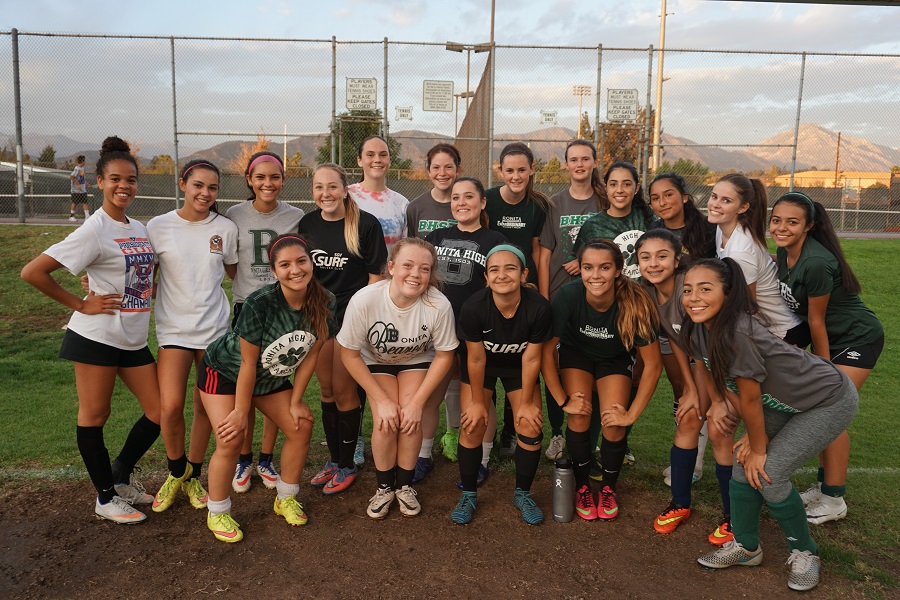 After the match, sweeten things up with a bundt cake from NothingBundtCakes [1]in the Stater Brothers Shopping Center.