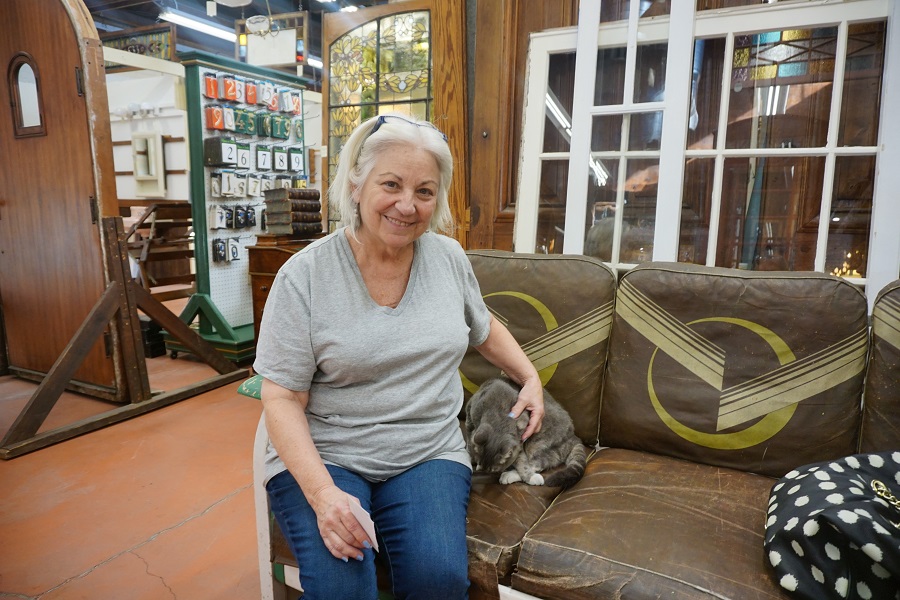 PASADENA, California, October 8, 2017 — There are certain truths or theorems you can take to the bank, like “for every action, there is an equal and opposite reaction,” or “an object in motion stays in motion unless acted upon by an outside force.”

Well, here’s another: “If you have an old house, you need to know us.”

The speaker is Gayle Stone, who along with Chris Shackleford and Wendy Chambers are the owners of Pasadena Architectural Salvage in Pasadena, which for San Gabriel Valley residents seeking vintage doors, windows, mirrors, stained glass, lighting fixtures and other period-appropriate pieces to restore and preserve their historic homes is the Holy Grail.

And with the closing of the venerable Crown City Hardware earlier this year after 101 years of doing business, Pasadena Architectural Salvage, housed in a Foothill Boulevard building that used to be a date and honey bee farm, has become an even more precious resource for old home enthusiasts. Think of it as an exclusive thrift store for your house.

“Somebody has to keep it alive,” Gayle said. “People need this stuff.”

Five railroad cars of “this stuff” arrived from Houston, after the store’s original, Cary Pasternak, fell in love with California, settled in Monrovia, and moved his inventory here in about 2000. Both Gayle and Chris had worked with Cary in Houston and decided to join him on his new California adventure. 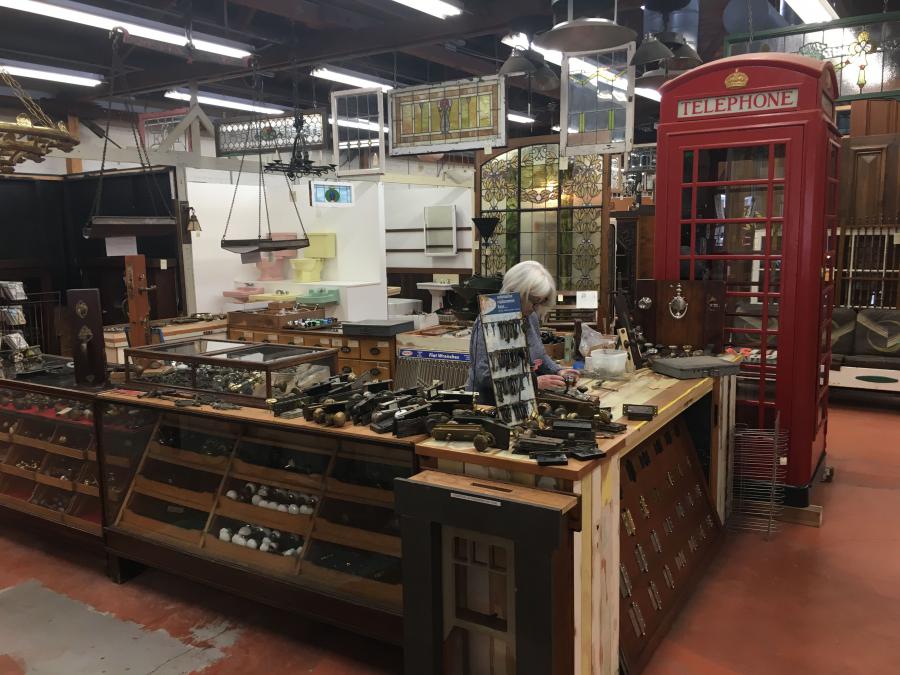 “I’ve always liked old houses, i don’t like new houses,” Gayle said, adding that older buildings and houses were often made with high-quality materials, such as old-growth wood and heavy metals like bronze and copper that has aged gracefully.

After Pasternak died in 2008, Gayle and Chris purchased the business from the estate, and with their new partner Wendy, have steadily seen the business grow.

“The truth is, we’ve been collecting a very long time,” Gayle said. “What you see here doesn’t happen overnight. 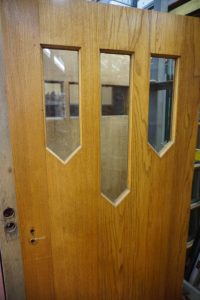 “People call us every single day, they’re tearing something down, they’re doing a remodel.”

So instead of the windows and doors and other heirlooms becoming fodder and debris for the trash compactor, they rescue or salvage the stuff, hoping to one day match it with an owner who can find a new home for it.

Fair warning: Walking around Pasadena Architectural Salvage won’t dazzle you the way, say, a stroll through Restoration Hardware will, but the treasures are there all the same. After the application of a little imagination and elbow grease, a beveled-glass Arts & Crafts doors from Pasadena Architectural Salvage can convert a drab entrance into a grand new opening or one of its hanging stained glass panels can transform a dull family room into a warm, glowing space. A stained glass window is also a great solution for providing a little more privacy between you and your neighbor.

If you ask Gayle which is better, a new door or an old one, you’ll get an earful.

“New doors aren’t near the quality of the old ones,” she replied. “All the good wood has been used up. It’s gone.”

New doors are also less economical, according to Gayle. 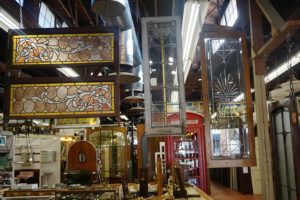 “It’s almost cost prohibitive to have new doors made, and they’re still not as good as the old ones,” she said. “We sell an interior five-panel door, all Douglas Fir, old-growth wood, for between $75 and $95 versus having one made for you that would cost about $300.”

If you lack the technical skill or ambition to do the work yourself, Pasadena Architectural Salvage can recommend a list of expert restoration installers. And they know a thing or two, as well.

“We just had a guy in here this morning whose front door didn’t work and we fixed his lock for him,” Gayle said.

Gayle, Chris and Wendy’s business is getting to the point that if they don’t have the part, it might no longer exist. After Crown City closed, and then Architectural Detail shuttered its doors, located right next to their location, Pasadena Architectural Salvage purchased much of the existing inventory. 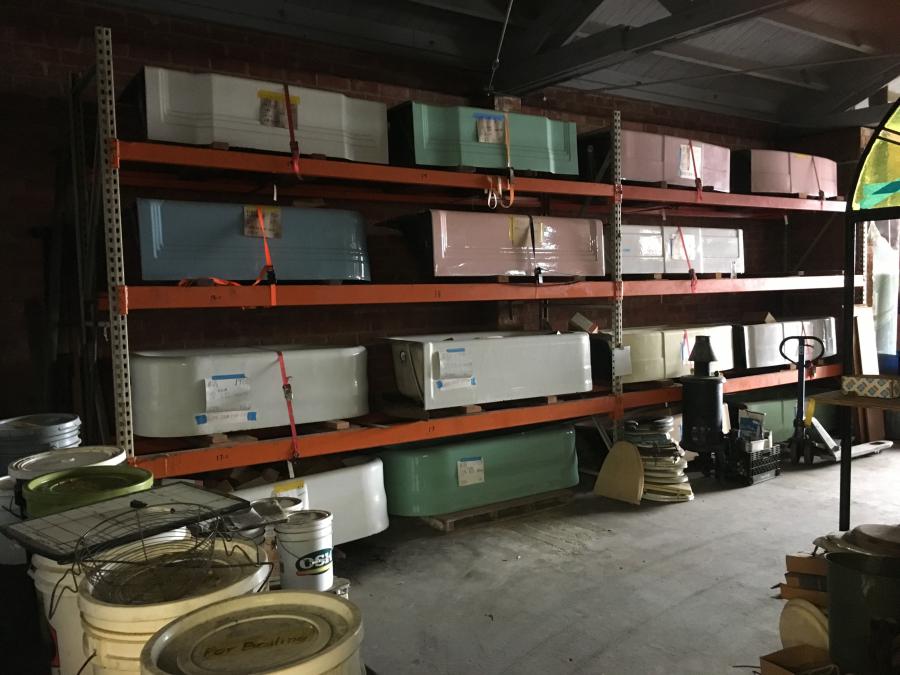 “In the ’70s and ’80s a lot of bad stuff happened,” Gayle recalled about the trend when painting original woodwork was all the rage. “They took out the old stuff and put in junk. So most people today are trying to put it back the way it was.”

There’s one more truth that came from Tacitus, the ancient Roman senator and historian: “Old things are always in good repute, present things in disfavor.” 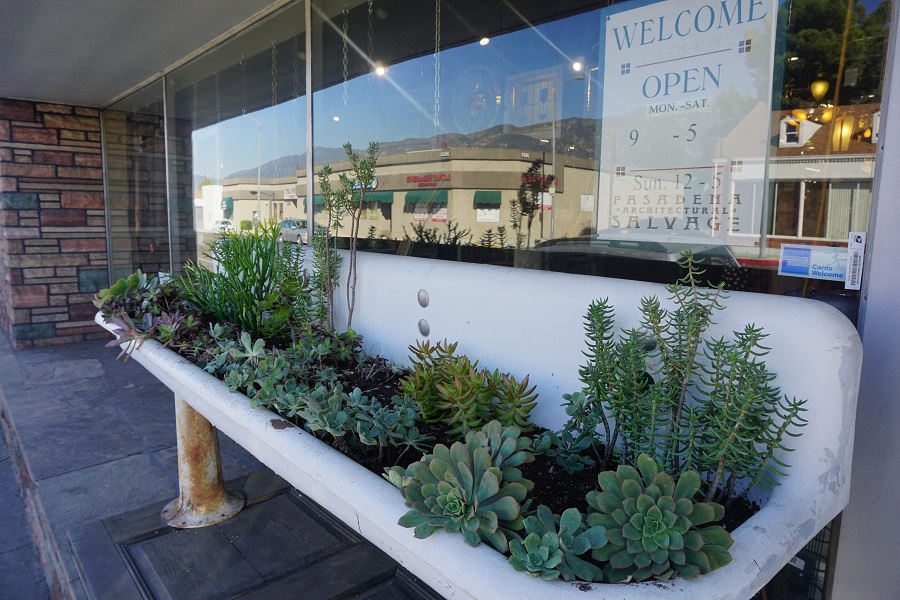 We asked Gayle for a few tips about fixing up an old house. Here’s what she told us:

For more real estate stories and insights, click on The Real Dirtt blog by longtime Realtor Colleen Bennett, Sotheby’s International Realty, DRE#01013172. You can reach her anytime at cmbenzz@gmail.com or 626.344.0907.