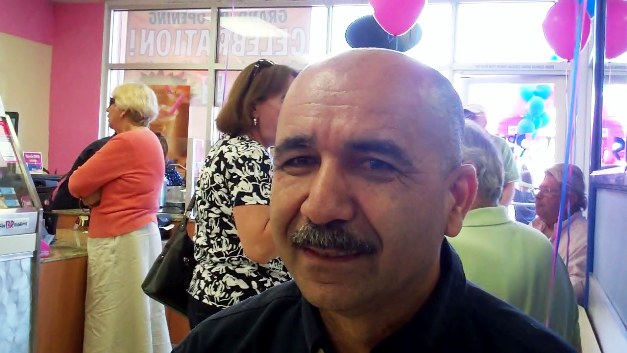 31 Flavors owner Said Rawani was all smiles on Saturday at the grand reopening.

31 Flavors in La Verne has just added a new flavor in the form of new owner Said Rawani, who celebrated a grand reopening of the long-time 31 Flavors location in the new Von’s Center with a DJ, balloon artist, spinning Wheel of Fortune and La Verne’s very own Community Cheer Girls.

“I love the neighborhood, and the small-town feeling of the community,” said Rawani, who was graciously passing out samples of Cappuccino blasts and berry smoothies to a gathering crowd of friends and well-wishers.

“I like putting smiles on people’s faces,” said Rawani, wearing a wide grin, no doubt pleased that after two months of remodeling the store he was finally ready to unveil it to the community. “This is a happy place.”

It’s a super-clean place, too. “We had to do everything from scratch,” Rawani said. “We redid the walls, the floors, the counters. “It has to be appetizing,” he said.

Rawani has hired local high school and college students to do the scooping and make the shakes, smoothies, sundaes and sundry sweets for which 31 Flavors is famous.

Besides all the new help, there are some new items on the menu, including soft-serve ice cream and low-calorie Cappy Blasts, a frosty refreshing mix of coffee and ice.

“When you come here, you will smile,” Rawani said.