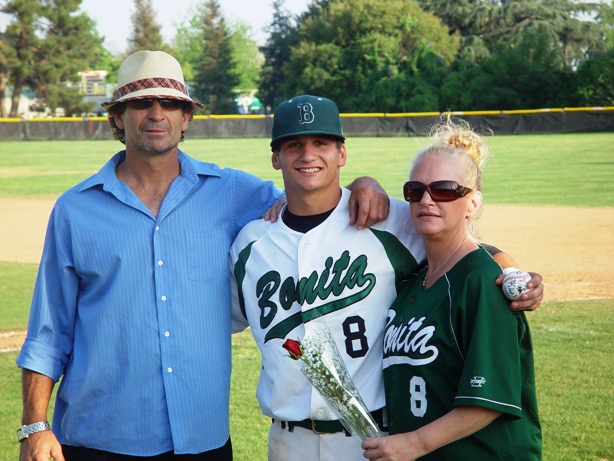 Two Hats and a Hug: Senior K.C. Huth showed up big on Senior Day with four hits and a home run.

On Senior Day for the Bearcats, the team pounded out 20 runs on 18 hits and played flawlessly on defense to spank the West Covina Bulldogs 20-4.

It was a gaudy offensive display marked by some incredible individual performances.

Matt Gelalich went 3 for 4 with a triple and 3 RBIs.

Robert Mier went 2 for 3 with a three-run home run and 4 RBIs.

Matt Rodriguez was 1 for 2 with a double and 2 RBIs.

The hit parade never stopped with more contributions coming from Andrew Rojas (a triple) Woody Reyes, Tyler Heslop, Mark Lindsay and the rest of the Bonita bangers. ompany. In the bottom of the first, the Bearcats hung up 10 runs on six hits, sending up 13 batters to plate.

“It was great to send a message first inning, scoring 10 runs,” coach John Knott said. “I thought our guys swung the bats really well across the board. Every single guy. Robert Mier got the big home run. Matt Gelalich hit the ball hard. We got a big two-out hit from K.C. Huth It was just a number of guys, and I think that’s what makes us difficult to beat. We have multiple guys who can swing it and get it done.”

What’s ironic is that numerous scouts in attendance, almost outnumbering the fans in the stands, had come to view the pitching in the towering figure of big Bonita senior left-hander Adam McCreery who has recently came off the DL and is working his way into playoff form. McCreery uncharacteristically walked five batters, but made the big glove-popping pitches when he had to, surrendering just a run while striking out three in four innings. 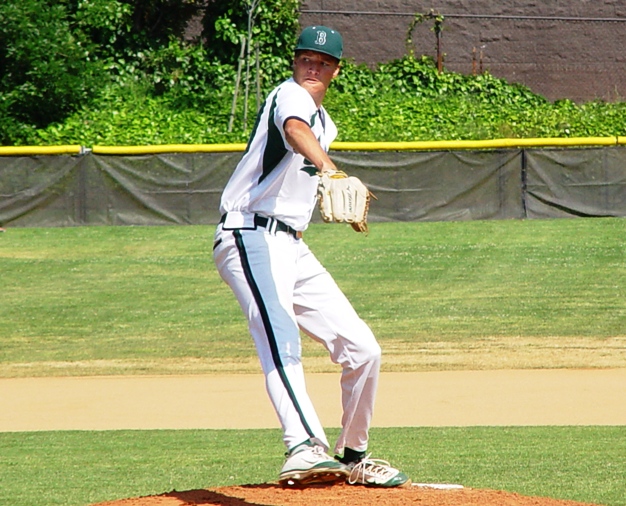 “We’re just trying to get better, that’s the goal,” Knott said about McCreery’s late-season effort to get playoff sharp. “It’s a work in progress with him. The velocity is there, the stuff is there. It’s just getting the mechanics down. You could see as we got going, he was throwing harder and getting better.”

Bonita (21-4) finishes the regular season on the road next week with games against Rowland and Diamond Ranch, and then will await to hear its first-round playoff match-up.

“We’re going to try to fine-tune everything,” Knott said. “In the playoffs, you have to be ready for everything.”

After the game, senior players posed for some picture-taking with their proud parents, and then the entire team broke into a funky dance. They were reaching skyward, as if to show they’re reaching for a title, and nothing short of that will do.

Bill Henley, Colley Ford general manager whose son Nolan plays for the Bearcats, announced that for every new or used vehicle Colley Ford sells, the Glendora dealership will donate $50 to the after-school program of the buyer’s choice. Just mention this promotion at the time of delivery. “We know that money is tight for after-school programs so we hope this helps,” Henley said. Colley Ford is located at 1945 Auto Centre Drive in Glendora. For more information about the promotion, call (909) 592-4131 or email Henley at b-henley@colleyford.com [1]. 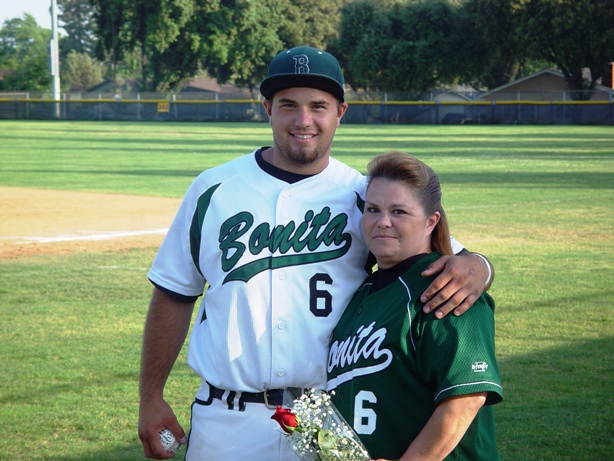 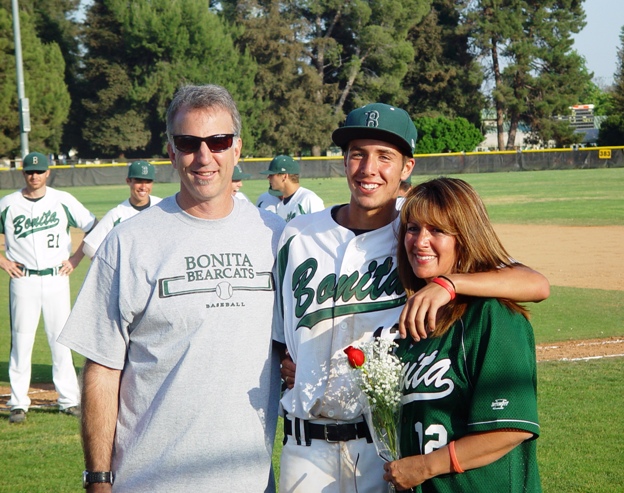 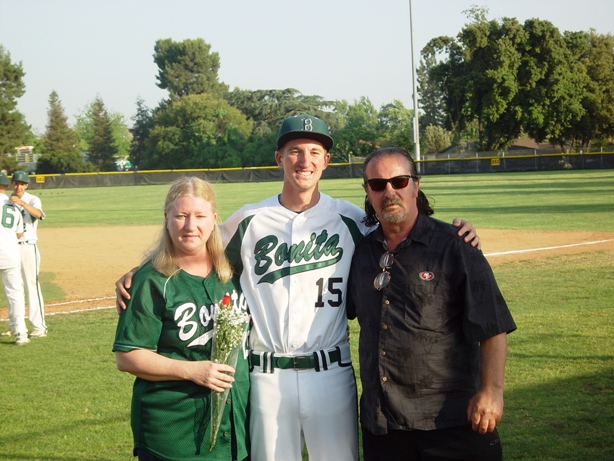 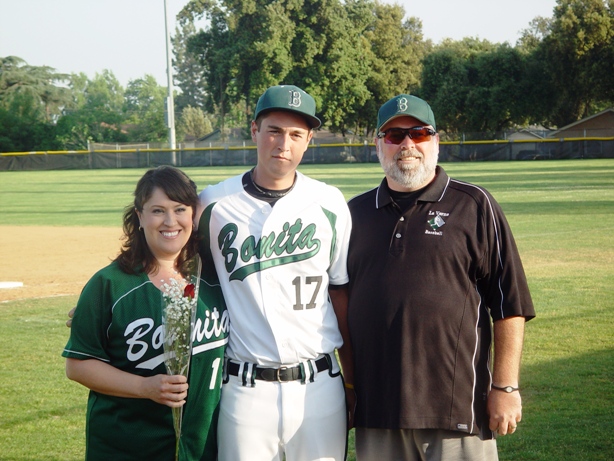 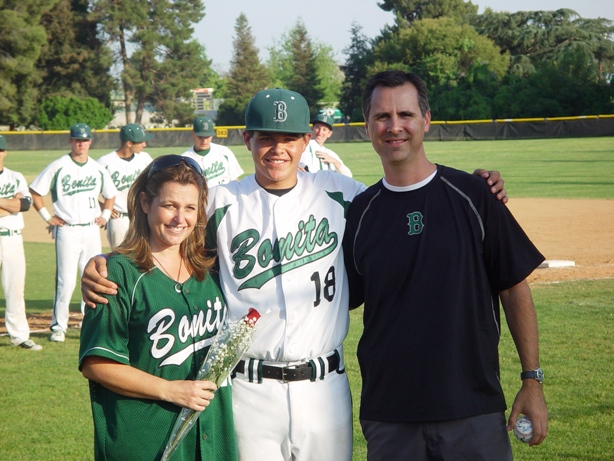 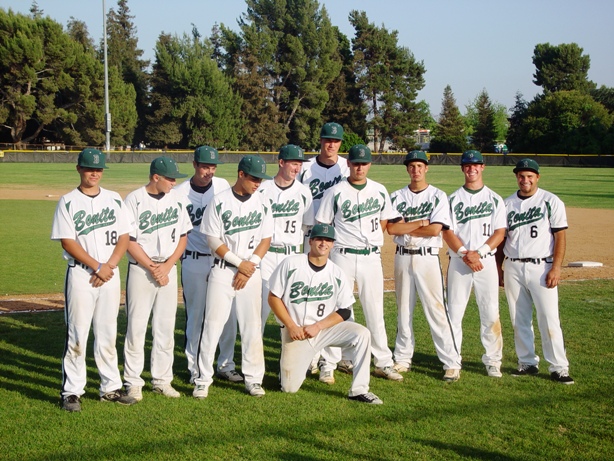 All for one, one for all!

Our apologies to seniors Conor Vislay and Robert Mier for not including their photos due to a camera malfunction.