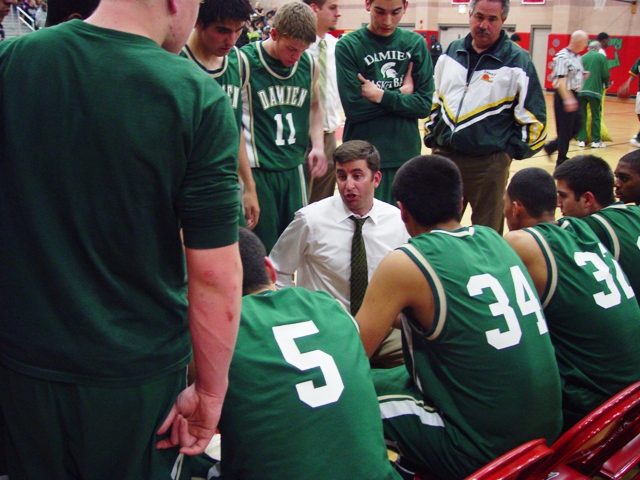 There are universal truths that apply as much to the game of basketball as to the laws planetary motion. The number four, for instance, will always be greater than the number two.

That simple fact played out last night as Eisenhower High School defeated a never-say-die Damien team 82-74, paced by their four outstanding shooters, Kirby Gardner, Alex Varner, Bernard Ireland and Keyon Sales, of which any of them can put up 25 points a night, according to their coach Steve Johnson, versus Damien’s two main scoring threats, Chris Adams and Chris Reyes.

“We’re a good defensive team,” said Damien Coach Matt Dunn, but tonight we just couldn’t stop them. They have a great offense.”

It was a classic semi-finals rematch from last year with several lead changes in the first quarter before the Eagles clawed to a three-point lead, 16-13, after the first eight minutes of play.

Early in the second quarter, Damien regained the lead, 19-18, on a basket by Reyes for whom the Eagles had no real defense. After Eisenhower took the lead, 25-24, Reyes responded with a thunderous dunk to put Damien ahead 26-25, but that would be Damien’s last lead of the night after Kenyon Sales immediately answered with a three-pointer to put the Eagles back on top, 28-26.

And that was the story line. Each time, the Spartans mounted a run to carve into the Eagles’ lead, Eisenhower’s run-and-gun offense and precise perimeter jump-shooting safeguarded or expanded it. The Eagles also got some unexpected help when Reyes picked up his third foul with about 50 seconds remaining in the half. At half-time, the score was 38-35, and other than Reyes’ foul hanging over his team, the Spartans’ prospects looked bright.

In the fourth quarter, Damien inched closer, 62-55, with 3:27 left on a deuce by Adams, but then Damien couldn’t find the range from the baseline despite several open looks. Varner, a senior, however, took full advantage of Damien’s misfires and scored the next seven straight points, converting a layup and extra point, another free-throw and a three-point bomb to put the Eagles up, 69-55 with 1:55 left.

From that point forward, the Eagles played clock management, content to exchange free throws for a late flurry of three-pointers by Damien’s Adams, who finished with a game-high 34 points, including seven three-pointers. Reyes finished with 15 points and 12 rebounds.

“I thought that Reyes’ foul trouble held him down a little,” Eagles coach Steve Johnson said.

There was nothing holding down the sharp-shooting Eagles, however.

“We got the shots we wanted,” Dunn said. “They just made more of them tonight.”

Also working for the Eagles was the game site. Although the game was played at a neutral location, Redlands East Valley High School, Johnson got to select the venue as the home team.

“Earlier in the season we played here and hit 16 three-pointers,” Johnson said.

Back in their favorite “road” nest, it was home cooking all over again for the Eagles. 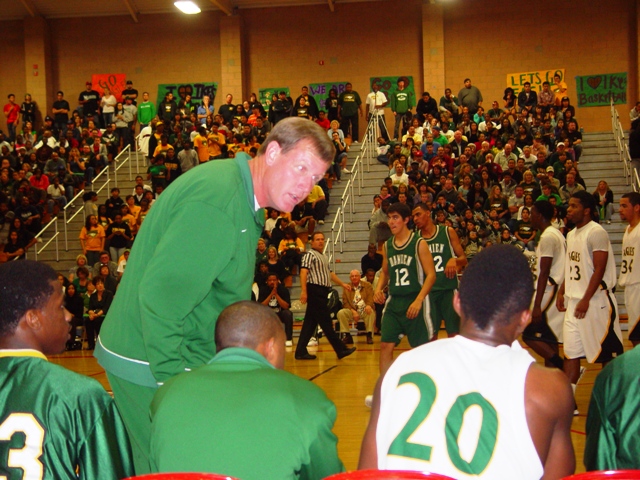 Eisenhower Coach Steve Johnson is one of the CIF Southern Section's most animated coaches.