Mitch Newell appears as if he's already in mid-school form.

The Ramona Vikings (weren’t they the first to discover America?) have never believed in wasting time, so under the able stewardship of Principal Anne Neal, the distinguished California middle campus held “Back to School Night” on the first day of school, Aug. 24. Teachers like math instructor Mitch Newell who were wearing sandals and board shorts only the day before as part of his summer attire were now outfitted in smart-looking ties to go with their button-down shirts.

Jeannie Hemenover starting her 23rd year at Ramona came with a ready smile to assure anxious parents that their children would succeed, although she isn’t thrilled by the feeling that at times she has had to become more of a tester than a teacher.

“We have to focus so much more on testing now,” she said, as a new group of parents began taking their seats in her classroom. “It’s a very big challenge to try to still make it (the subject matter) interesting and enjoyable for students and still do well on meeting the standards and testing materials. 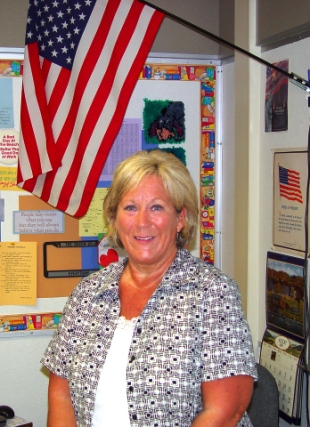 Jeannie Hemenover is a longstanding favorite with Ramona students.

“I used to be able to do so much more,” added Hemenover, whose husband and son are middle school teachers in Covina. “I felt that the kids were learning the same things, but we’ve had to give up too many of the activities that I felt made them really connect to the 7th grade and who they are at this time in their life.”

Despite these new bureaucratic encroachments, Hemenover, who is teaching 7th grade English and Public Speaking this year, remains a school and now generational favorite of students and their parents. “I love interacting with the kids. That’s what brings me back each year. I get to share in their life for a little piece of time.”

Mitch Newell, the 8th grade algebra teacher who came dressed to impress (old school), quickly laid out his classroom game plan for parents. “It’s going to take a commitment from students and parents,” said Newell, who is also the pitching coach for the Bonita High School varsity baseball team. “Algebra is one of those classes where you have to come and be prepared and work hard every single day because the algebra concepts build upon themselves.”

Patience is another virtue, Newell noted, that will be required as students try to master new concepts. “This level of math is the biggest jump in difficulty from 7th grade to 8th grade,” Newell said. “Students who have experienced success may encounter some difficulty right in the beginning, but they usually get on track and they usually understand what it takes to be successful in this class within a month or two.” 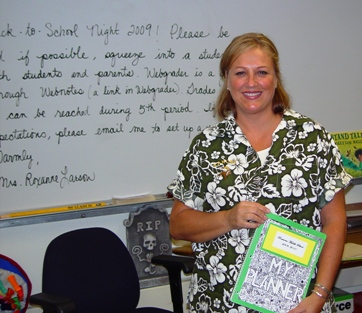 Roxanne Larson, who graduated from Ramona in 1978 and Bonita High School in 1982, has been teaching at Ramona since 1999. She was admiring her modernized classroom, very much appreciative of the school bonds passed by La Verne and San Dimas voters that made the upgrades possible. “My classroom is beautiful,” said the English teacher. “I have a sink. I’ve never had a sink before. Look at my big whiteboard.”

She said her students will receive a first-rate education. “We teach it all,” she said. “Grammar, writing, reading, spelling, literary analysis…” Her state-of- the-art classroom lets her use a mix of media to help reinforce her lessons and keep the kids captivated.

Over the summer, Larson, like so many other Ramona teachers, visited her classroom to make sure it looked its best for opening day. As needed, she also will come in on weekends to prepare lesson plans for the week.

Her extra effort is driven by the love for her students. “They teach me things,” she said. “Today, the big talk was, we’re not competing against one another in here. Everybody comes in here with different experiences and we all start at different levels. The goal is we are all going to improve and we’re all going to be proficient or better at the end of the year.”

Elana Webb is Ramona’s full-time drama teacher. Her 8th grade drama class has the opportunity to go to New York and see the bright lights on Broadway again this year. Her young thespians go for six days, see four plays and stay in the Times Square area.

Forget “to be or not to be.” Ramona kids want to be in her class.

The student actors also have to be salespeople, too. “Everyone has the opportunity to raise the funds for the trip,” she said.

As for her drama schedule, Webb said she is leaning toward producing four one-act plays in January and a musical in the spring, meaning her students may have to learn to sing and dance and dance as well.

What dramatic webs and yarns will Mrs. Webb spin for her students this year?

We know “America’s Got Talent,” but do Ramona students have talent?

“Ramona has so much talent; that’s why I have 57 students in this class,” Webb said.

As for the students who didn’t make it this year, remember lots of Oscar-winning actors were passed over in their first attempts to win over Hollywood, too.

Margaret Rasmussen was another teacher beaming on Back to School Night. Her 8th grade science classroom (laboratory) is magnificent. Even Galileo would have been impressed – wide counters, neatly stacked books, a dust-free environment and an explosion tank. He would have been equally awed by Rasmussen’s subject matter: physics (force and motion concepts, buoyancy, friction, fluids), chemistry and astronomy.

“We really prepare them for high school,” she said.

Surely, such demanding coursework must be an elective?

“This class is mandatory,” she said.

What’s more, she feels they can handle the material. “Most of it is introductory material, which will be reinforced in their high school chemistry and physics classes.”

Rasmussen has been teaching 22 years, including the last dozen of those at Ramona. Science flourishes at Ramona, and one of the primary reasons is Rasmussen. With her considerable background, she knows how to strike a happy medium between teaching scientific principles and filling her kids with wonder. 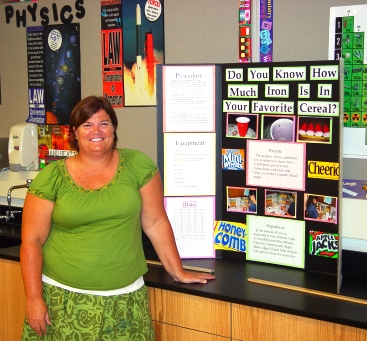 “We light magnesium on fire, which is a basis for fireworks,” she explained. “It lets off a very bright light. They are 8th graders, after all, so any time you burn something up or get something to explode, they get pretty excited. The reason kids love science so much is we get in there and do hands-on constantly. Probably once a week, they’re standing at those labs doing something.”

Rasmussen and two other teachers all wrote winning science grants for $10,000 each. The total of $30,000 will be the focus of a separate LaVerneOnline story, but the monies from the BP Global energy grants will be all devoted to alternative energy projects and research.

Perhaps, no one was more excited about the start of the new school year and Back to School Night than Principal Anne Neal, now in her third year at Ramona.

“It’s a great place to come to work every day,” Neal said, boasting about the modernization of the school’s facilities. “We’re looking to now do the grounds to reflect the same quality and excellence seen in our classrooms.”

Also out in full force were members of the red, blue, gold and green Renaissance student groups who were greeting parents, passing out directions, selling refreshments and adding general cheer and excitement to the warm evening.

From the bright lights of Broadway to their brightly colored Renaissance tee shirts, it won’t be hard to find Ramona’s 6th, 7th and 8th grade students doing outstanding things this school year. 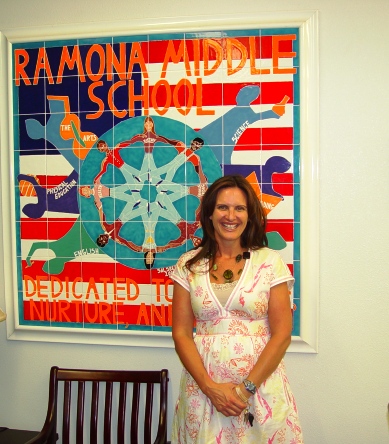