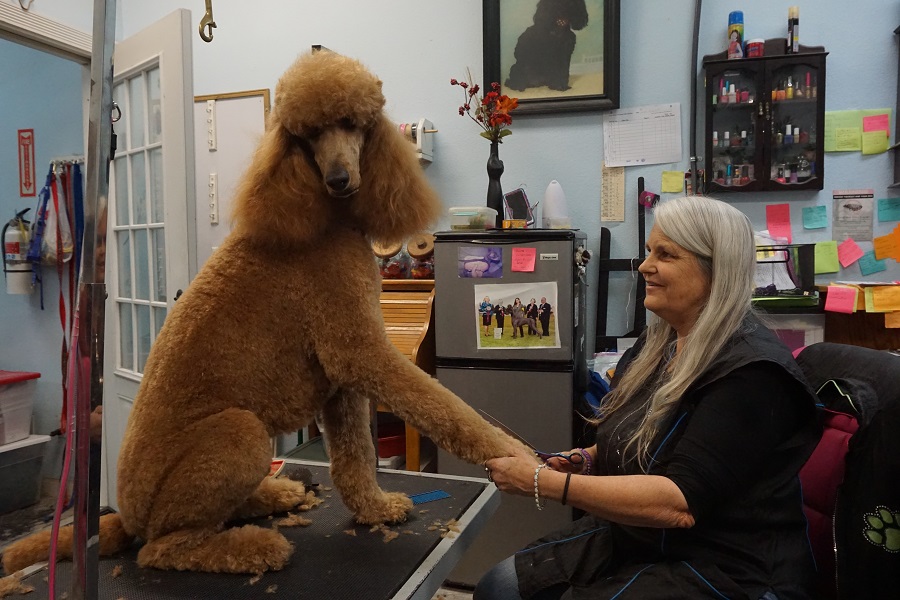 Standard Poodle Mickey takes a moment from his grooming to ham it up for the camera.

LA VERNE, California, November 28, 2017 — When you walk into A Cut Above Pet Care Resort and Salon, you never know exactly what you’re going to get or walk out with.

That’s because when you bring in your dog or cat for grooming, you have to pass by a veritable Noah’s Ark filled with rescue animals needing homes, such as cats, chickens, rabbits, guinea pigs, rats, and scaly reptiles.

And then, of course, there is the former melange of matted mutts, who with owner Roni Koepp’s special brand of love and care she has transformed from beasts to beauties, all in the attempt to get you to adopt them.

“One of my clients recently found Wally, a little Silky Terrier, in Fontana,” Roni said. “He was a mess and had been on the streets for a while. We brought him in, cleaned him up, showed him, interviewed potential owners and we found a home for him.

“Now he lives by the beach and is spoiled rotten.”

Oddly, Roni said rabbits, despite their cute, cuddly nature, are the hardest to find homes for, especially the older ones.

“They take the longest to adopt,” she said. “I had two for a couple of years. I don’t why. They are wonderful pets. They’re quiet and easy-going and you can litter-box train them just like a cat.”

Roni won’t release any pet before its time. She pointed to a couple of kittens who were eavesdropping on her conversation. 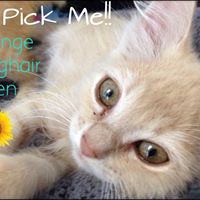 “These kitties are just bottle-feeders. They won’t be ready to go home for weeks,” she said.

If they catch the fancy of a client, the customer can reserve the kitten with an adoption fee.

“But we don’t cash the check until they get the pet,” she explained.

After adoption, if the person finds out he or she no longer wants or can’t keep the pet, the animal can be returned.

“They can bring the animal back, but they don’t get their donation back,” Roni said. “It’s just like giving to your church. The money goes to helping others.”

Roni’s animal rescue operation is a registered 501 c (3) called Animal Wellness Rescue, Inc.  If you don’t want to get her riled up, you won’t talk about other rescue nonprofits.

“Other nonprofits, about 70 or 80 percent of their funds goes to administrative costs and creature comforts for people, not animals. Here every dollar, every dime goes straight to the animals.

Roni’s pet potpourri of furry and leathery friends leaves you defenseless and feeling guilty if you don’t take one home.

“I’ve been doing rescue forever, as long as I’ve been grooming,” said Roni Koepp, who graduated with a Fine Arts degree from Cal State Fullerton. Today, the only difference between her college years and now is that instead of spinning and sculpting with clay, she’s practicing the fine art of shearing and scissoring away to rescue animals from bad hair days.

And they’re are plenty of those. 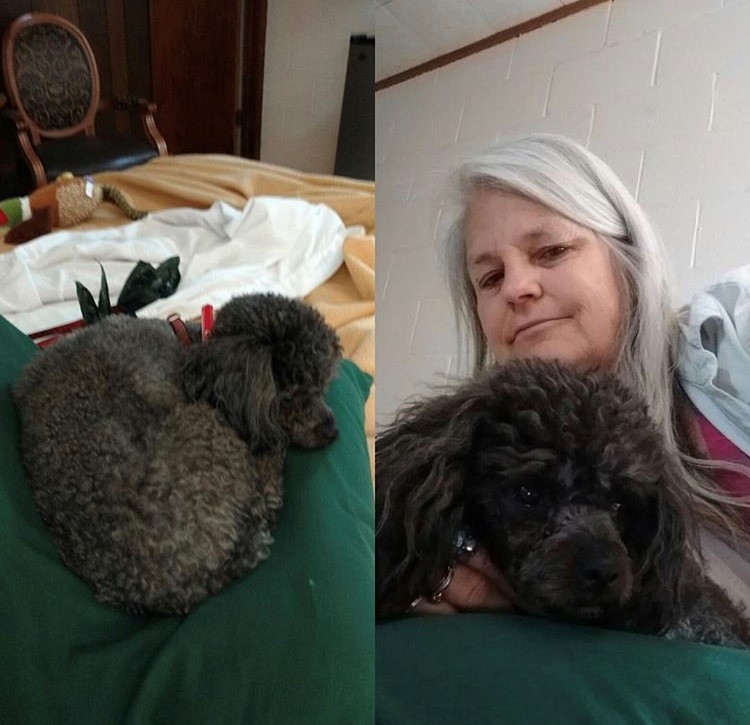 Roni and her pooch do a little bonding.

“Lots of people believe there’s nothing to grooming hair, but it’s not as easy as they think,” Roni said. If they don’t know what they’re doing, especially around danger zones like armpits, hocks and the sanitary area, they can endanger the animal.

“Males and females are different because the boys have the plumbing up front and the girls in the back,” she said.

With Roni, the animals are always in good, loving  hands. “I never had kids, unless you count four-legged ones,” she admitted. In that case, her family now runs into the hundreds.

The more you hang around Roni, watching her scissor and snip, you realize she is the real deal.

For one thing, she is about as local as you can get. She was born at Pomona Valley Medical Hospital Center and she graduated from Bonita in 1974. After college, she worked at Petco, ran a grooming van, then a grooming shop out of the back room of her Victorian house in Claremont for a dozen years. She’s been in her current Emerald retail location for eight years.

As more evidence that Roni has a way with animals, La Verne Online noted that during the entire interview conducted over the constant hum of her clippers, Mickey, the Standard Poodle she was grooming, didn’t so much as fidget or flutter an eyelash.

She definitely has a dog-whisperish connection with animals.

And that’s saying something, because she said she prefers grooming cats and rabbits more. In fact, Wednesday is known around town as “Cat Day” at A Cut Above.

For first-timers to her La Verne shop, she throws in a complimentary aromatherapy massage, which includes a shampoo with a full-body massage.

“The bathing and massaging helps us bond with a new pet that doesn’t know this place,” Roni explained.

After hand-blowing the animals dry, they’re walked and prepared for grooming.

That’s when the real fun and fur really begin to fly.

Roni lavishes as much attention on rescue cats and kitties. This one is meowing faintly, “Please take me home.”

Roni and her team of groomers can create almost any style. They can bling it up with painted toes and bow or bling it down.

Lately, Asian Fusion or Freestyle cuts have been all the rage, which can turn little Muffy or Max into a teddy bear or Japanese anime character come to life. Best suited for these kinds of cuts are Shih Tzus, Poodles, Maltese, Schnauzers, and Yorkies. (Sorry, German Shepherds.)

Typically, dogs and cats should be groomed monthly, but whenever they come in, Roni is a sharp eye for spotting abnormalities, pointing out pre-cancerous skin problems or a loss of a weight due to a thyroid problem.

For the rescue side of her operation, Roni, who also once worked for a vet, regularly uses Colima Animal Hospital in Rowland Heights.

“They are a low-cost clinic, they are an advocate for rescues and they are very light on the sedation, so when they come back to me they aren’t all groggy for a day and a half,” she explained. 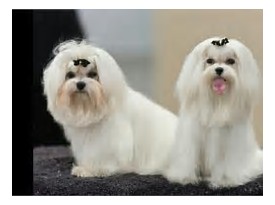 Vet bills, grooming bills, food, shelter, boarding costs …  when you start doing the math aloud, Roni cuts you offer before you can finish your calculations.

For her, making an animal part of your family involves more than math, it’s about staying healthy and feeling grounded.

“They’re also good for your emotions.”

Enough said, both Roni and her grooming salon are a cut above. 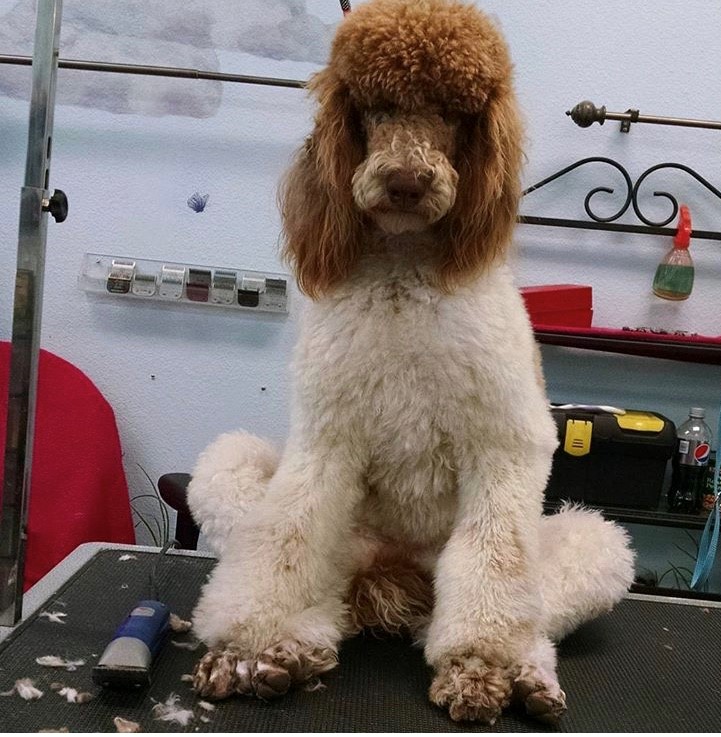 The big dog always gets the last bark and picture!