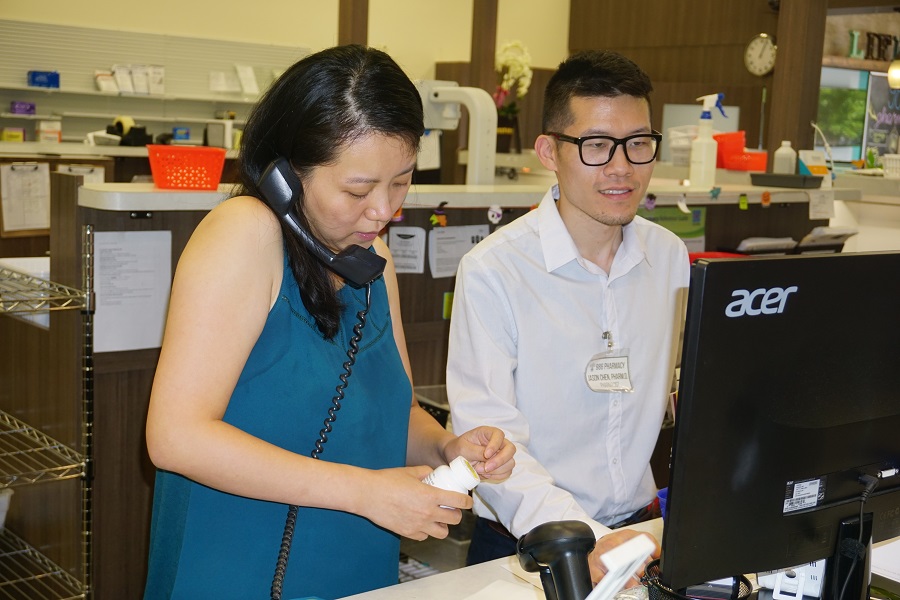 Lilia and Jason are the dedicated (married) duo behind 986 Pharmacy in La Verne.

LA VERNE, California, October 11, 2017 — Have you noticed that La Verne has lately been on a health kick?

Gilead, the pharmaceutical giant and already the second largest employer in La Verne, opened its doors here this year. Pomona Valley Hospital Medical Center is expected to open a satellite facility here in December, and, then there is 986 Pharmacy, which operates six pharmacies in Southern California, including its first location which opened in La Verne in 2015.

The owners and operators of the La Verne flagship store are Jason Chen and Lilia Xu. They met at USC pharmacy school and later married despite the fact he attended USC as an undergrad and she UCLA.

College rivalries aside, their union has produced not only a great business and business relationship, but also baby Allison, their 1-year-old daughter.

After pharmacy school, Lilia went to work for Ken Thai who worked for Partner Health in Monrovia before he and a couple of other leading Southern California pharmacists brainstormed the concept of 986.

That concept was to give customers speedy access to the medicines they need to keep them normal and healthy, with 98.6°F (37°C) being the optimal temperature for human beings.

Anything you can do, I can do better

Just like the CVC, Rite-Aid, Wal-Mart and other drugstore chains, 986 can dispense all the drugs and medicines that their customers require, but 986 feels it can deliver service in a faster and far more nimble and intimate way.

“If you come here, you’re going to get much better service,” Jason said, noting that 986 Pharmacy also offers free delivery, which should be a big selling point for La Verne residents, especially those living in the higher foothill neighborhoods that want to reduce their car trips down to the boulevard..

Typically, 986 Pharmacy aims to get its clients in and out the door in five to 10 minutes. For first-time customers who have to fill out some initial paperwork, that initial time can run a little longer. Some unique prescriptions not always supported by insurance companies can also take a little longer to fill while Jason or Lilia get on the phone, going to bat for their customers trying to find a comparable generic drug or getting the insurance company to change its initial decision.

As for as what their customers pay, the amount is often no different than what they pay at the large chains, and, in fact, can be lower as Jason, Lilia and their staff look for manufacturers’ coupons and other discounts that will bring down their customers’ costs.

But maybe where 986 excels the most is in applying the personal touch. Jason and Lilia try to get to know all their customers on a first-name basis. When they make decisions, there isn’t a corporate maze they have to appeal to or go through.

“We’re the decision-makers,” Jason said. “We’re the ones trying to make the best decision for you.”

La Verne had been the home of an independent pharmacy before the shop closed its doors about 10 years ago, so the city was a natural choice for 986 to start its enterprize and fill that need that was no longer being served.

Since opening, Jason and Lilia have also proved themselves to be good neighbors. The interior design of 986 is modern and inviting, incorporating elements such as a chalkboard wall, marquee letters and photos of La Verne landmarks. For their fine interior design work, 986 Pharmacy was recognized with a 2017 La Verne Community Design Award in the Interior Design category.

Such growth in such a short time shows that Jason, Lilia and their partners clearly know how to write a prescription for success.

Why not give them a try!

They are located at 2143 Foothill Blvd in La Verne.  They open every day, except Sunday, working diligently to continue La Verne’s expanding emphasis on health.