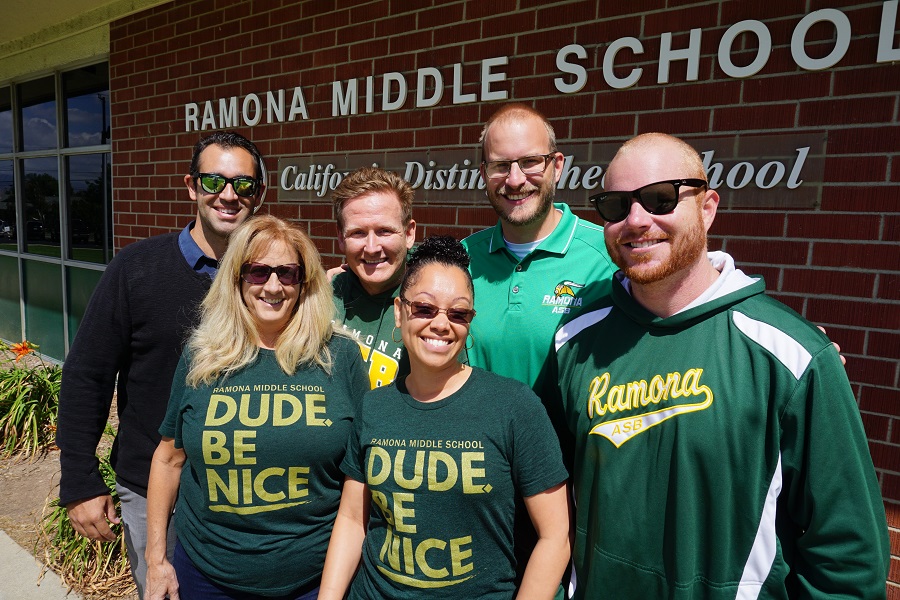 When James Ellis was selected as principal of Ramona Middle School in La Verne, the Bonita Unified School District knew it would be hiring a leader, innovator and a competitor.

As for the latter, Ellis, a former gymnast with the University of Illinois, has never lost a handstand challenge to one of his Ramona students, and doesn’t plan to.

“Competition is good,” Ellis said, speaking inside his office on a casual day Friday, wearing a vibrant green Ramona sweatshirt.

That same competitive fire spills out of Ellis when he compares the quality of education Ramona students are now receiving with private school alternatives.

Obviously, his administrative style is registering with staff, students and parents because he was invited back to Ramona after serving as an assistant vice principal at Ramona under Mark Rodgers and Anne Neal from 2006 to 2010 before becoming Gladstone Elementary’s principal from 2010 to 2017.

Most people wear out their welcome after a few years, but in Ellis’ case his constituency wanted more.

Ellis’ journey to where he got today involves both destiny and serendipity. The son of a fourth grade teacher and an economics professor, he certainly got a first-hand look at what the family trade was all about.

Education for him also was an intimate experience. There were 36 students in his graduating class of 170 students in Pawnee, Il. Today when he hears some people describe the Bonita Unified School District as small, he laughs. “They have no idea what small is,” he said.

After arriving in California, he taught gymnastics in Covina, Calif., including a nationally ranked future Olympian. “I thought that would be my life,” Ellis said.

But the reality is the sport of gymnastics is a vanishing pastime, not to mention the physical toll it takes on coaches training athletes for the world stage. “Unless you’re Béla Károlyi (the famous Romania gymnastics coach whose protege Nadia Comaneci received the first 10 in Olympics history), you’re not going to make a million dollars.”

So knowing he would have to find a “stable and consistent” income to stay in Southern California, he walked on the San Dimas High School campus one day and applied for a part-time teacher position that had opened. He was hired, and the next year he was full-time. Over the next years, Ellis taught math, drama and ASB on the Saints campus.

Then he became assistant principal at Ramona for four years (2006-2010) before serving as principal at Gladstone Elementary for the next seven years (2010-2017).

There’s no debating the many differences that Ellis has experienced at the elementary and middle school levels.

For one, elementary students stay with their same teacher all day long while middle school students move from class to class for their English, math, science and social studies instruction. The average primary school boasts about 500 students; Ramona’s student body has about triple that, with some 1,340 students (at last count). Ramona also covers 10 acres.

According to Ellis another difference is that at the elementary level, “the principal is a rock star, they all want to talk to you; at middle school they don’t want to talk to you anymore.” Their peers become the most important people in their lives.

Despite the differences, real or otherwise, not to mention the sheer size of the student body he now deals with, Ellis has expertly handled the transition smoothly, just a little more than a month into his new assignment.

And that is what Ellis and his staff do extremely well. They care.

In the seven years, Ellis has been away from Ramona, he has seen some amazing changes. Students are more tech-savvy and more collaborative. They are also being challenged to make more real-world applications to their classroom learning. Conceptual thinking is now as prized as computational thinking.

“It’s not just adding, subtracting, multiplying and dividing,” Ellis said. “It’s about what you can do with the answer and what kind of problems you can solve with it. As a former math teacher, I love the trend.”

The same expansive, associative and collaborative thinking is being applied to science, history and English. Students are being challenged to draw conclusions and to articulate and present them to a broad audience.

In an English class that Ellis had recently visited, students were using Google Classroom to peer-edit one another’s work, making annotations in the margins, like “This is awkward” or “I don’t understand what this means” or “Give me more detail, or “This is great.” Feedback is no longer just coming from the teacher.

“Kids are giving that kind of commentary to one another,” Ellis said.

“We are asking ourselves what are the 21st Century job skills that students will need. No longer do we live in a society where we work in isolation in a cubicle.”

Toward that end, Ellis is pushing innovation and encouraging staff to take risks that might pay big educational dividends to students. He said that neither he nor his staff should be ready to call it quits at the first sign of failure, especially when there is good good research supporting their original idea.

He explained his thinking:

“You kind of get through it and find your way to smooth sailing.”

It was exactly that kind of thinking that Ellis used to implement a cutting-edge technology program at Gladstone, even when the financial resources were nowhere to be found. “I knew that if we had a good plan, the money would follow,” he said.

Ellis is clearly a competitor and he uses that spirit to fight for both his teachers and students, including those who don’t fit neatly into the mainstream.

Although the bell signaling the start of the school day doesn’t ring until 9 a.m., many of Ellis’ teachers, numbering close to 50, often open their classrooms early for tutoring. It’s often in these sessions that teachers find that students’ difficulty with learning or a particular subject is more than academic. “It could be motivational or organizational,” Ellis noted.

Working alongside teachers and parents, Ramona has “a counseling staff that is absolutely first rate” in helping kids on the periphery, according to Ellis.

Ellis has a lot to be excited about in his first year. Ramona’s new gym, which is expected to open in October (there are still some overhanging safety alarm bell issues), will be able to house the entire student body for special events. The first school dance attracted a record crowd of more than 350 students and the fall sports program is heating up.

Longer term, he’s enthusiastic about the role Ramona will play in shaping the character of every Viking.

If history has been recorded correctly, Vikings were a fierce, proud, energetic people ready to engage the world.

In Mr. Ellis, the Bonita Unified School District might have just found its Eric the Red.

Hey, have you dropped in the 986 Pharmacy that everyone is talking about? Family run. Lilia and Jason really know their stuff. Located near the Starbucks closest to Bonita High School. Free delivery, too. Give them a call today at 909.596.6168.