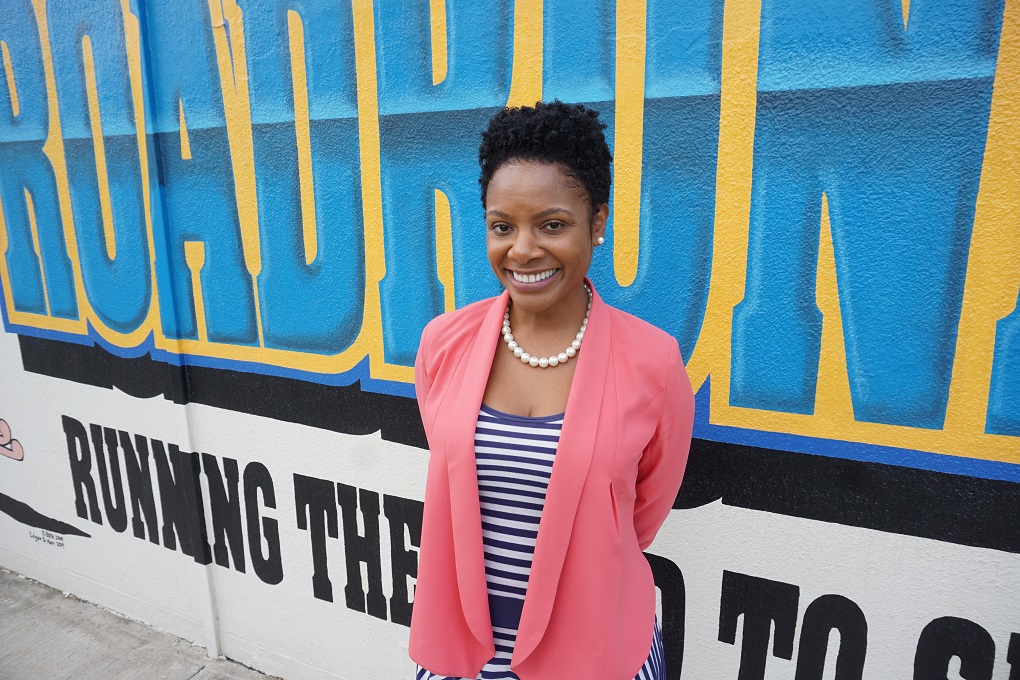 Grace Miller has a new principal with some BIG ideas. Tomeika Carter doesn’t just want to give the 467 kids on her watch an education, she wants to give them an experience.

So what better way to drive that lesson home with parents, students and staff than to have all your kids on their first day of school — and on your first day of being a principal at any school — view the solar eclipse.

So with the help of Grace Miller teacher Matthew Miller (who had called her over the summer to say,”Oh, by the way, did you know the first day of school coincides with the solar eclipse?”), other teachers, staff and parents, including one, formerly with JPL and NASA who donated a significant number of NASA-approved specs, raised the funds so that Grace Miller students could safely view the once-in-a-generation event.

“It, of course, completely disrupted our first day of school (where teachers typically go over their rules and schedules),” Carter said, “but it was a really, really great experience. I was worried at first because of safety concerns, but it couldn’t have gone any better. The kids did an amazing job.”

No doubt some of them will look back on that day as the reason they became astronauts and astrophysicists.

If Grace Miller parents think they’re just dropping their kids off simply to learn how to read and write, they have another thing coming.

Already in another of Carter’s classrooms a teacher had her seven year olds involved in an intense engineering project after they had mastered the reading and writing components about smoke-jumpers (firefighters who jump from helicopters to extinguish fires). With plastic army figures, pipe cleaners, coffee filters and string, the kids were able to recreate and demonstrate how firefighters could parachute into the site of the fire.

“I couldn’t have been more proud or impressed,” Carter said. “It was such a beautiful experience.”

Parents should be impressed with Carter — her high energy and concern for her students is off the charts — but she is realistic enough to know that some of the new changes and innovations she’s working to implement will encounter some resistance.

One of those changes involves no longer allowing parents before the start of school to socialize on the playground or in the school cafeteria with other students. In the past, when they did, it was difficult for staff to determine which parents belonged on campus and which didn’t.

“You’re more than okay to eat with your child in a designated area, but you can’t be in the cafeteria eating with other people’s children,” Carter said, explaining the new policy.

The rule is part of a bigger district-wide trend to increase safety. On September 15, Grace Miller and every other school in the district will introduce Raptor, a visitor-registration system that will read visitors’ drivers licenses and check them against the sex offender database to see if there is a match.

If there is a match, the system will then alert the staff in charge. Assuming there is no match, the system’s printer will issue a sticker badge with the visitor’s information. In subsequent trips to the school office, the visitor will simply give his or her name and a badge will be issued for the time on campus. The system was successfully piloted last year at Allen Elementary.

Coincidentally, in one of her first trips to Grace Miller, Carter was struck by the fact that Grace Miller didn’t have a gate or fence guarding the school’s perimeter. While the open nature of the campus is one of the school’s charms, Carter also recognizes the paramount concern for the safety of students.

As such, the Grace Miller Parent-Teacher Association conducted a survey asking its members how they would best like to use its PTA funds, about $28,000, in its treasury. Their options were the installation of a gate and fence, new playground equipment or computer tablets for the kids. The latter choice won out. A motion for a gate and security system was tabled.

Each choice had its pros and cons, explained Carter. For example, in the past it’s been shown that gates can provide a false sense of security and be breached by criminals intent on doing harm. Meanwhile, playground equipment needs ongoing maintenance. Although technology also becomes obsolete almost as quickly as it’s delivered, voters believed that it’s in the best interest of their children to give them every advantage from a tech perspective.

“Our goal is for the school to be one-to-one (one tablet per student),” Carter said, “especially since kids take their state tests online now. There is no more pencil or paper. If your kids already know how to navigate on those devices, they can focus 100 percent on their test.”

As for Carter, she’s still navigating the sea of boxes stacked in her small office that was just painted a light blue gray. She’s waiting for her district-issued furniture to arrive. But Carter has never expected any red-carpet treatment. That’s why she started pulling long days and nights over the summer getting ready for her first principal assignment.

Working hard and preparing are part of her DNA. She took her first job at McDonald’s when she was 15, and she has been on a steady career ascent ever since. At San Diego State, she thought she wanted to be a professor, but her first job after graduation was working in advertising for the San Diego Tribune in San Diego, selling ads to Macy’s and Nordstrom.

But she yearned to get back to the L.A. area and started subbing before she was awarded her own classroom in the Monrovia Unified School District, where her specialty was teaching U.S. history.

“When you love going to work and don’t hate Mondays, I knew it was clearly the job for me,” she said. “It was meant to be,” adding that since she was age four, she dressed up and played teacher. She taught for the next nine years.

After obtaining her administrative credential in 2013, she left the classroom to become an instructional coach. In effect, her new job was teaching the teacher, but “I hated it,” she said.

She wanted to be closer to the kids, and she got that opportunity when an assistant principal position opened at Roynon, where she served alongside Principal Matt Wiener for three years.

“With Matt, I just have to tell you, I was so happy to come to work every day,” she said. “I just knew it was the job for me. I felt I had a found a home in the district.”

After her second year at Roynon, a principal slot needed to be filled at Oak Mesa, but Carter said she didn’t feel quite ready to pursue the position. But with another year under her belt, her attitude changed. “I felt 100 percent ready,” she said.

And the fact that a position was opening with the pending retirement of Deanne Spencer at Grace Miller made her decision that much more certain.

“Grace Miller was this sweet, cute little school that was so adorable, I had to put my hat in the ring,” she said about applying for the top Grace Miller job.

Of course, after landing the job, reality quickly set in. At Roynon, with more than 800 kids, the largest total in the district with two campuses, there were two chief administrators — a principal and assistant principal running the school. At Grace Miller, with a smaller student population, she would be the lone adminstrator.

“I’m experiencing growing pains,” Carter admitted. “I’m definitely going through an uncomfortable period. I think it has a lot to do with my Type A personality.”

Carter thought by sneaking onto campus early over the summer, she’d get a head start on the challenges she faces as well as on the initiatives she wants to launch. “I was working seven days straight until eight every night, but my list of things only seemed to grow longer.”

Carter was smart enough, however, to start consulting and collaborating with her fellow principals about how to handle the added load and arrange priorities. Foremost, she’s a collaborator and a self-described fan of the “face-to-face.” That’s why most mornings, she’ll be out in the school yard, talking, jumping rope or playing basketball, an activity she likes to tackle once or twice a week.

“I took a spill last week,” she said, “but I redeemed myself by making the game-winning shot.”

Then turning serious, she added, “That’s how you get to know the kids and build bonds and relationships with them. That helps ease some of the problems that can crop up.”

She also will rely heavily on her leadership teams across every grade to weigh the merits of different ideas and suggestions that getted floated about to improve the school and increase learning.

“The best ideas I have gotten from others,” she said. “I’m a firm believer that when you sit down with people you can generate some very viable solutions.”

As much as Carter has hinted at being a change agent for good, she is also a traditionalist. Aware that teaching cursive writing is no longer a grammar school standard, she is relieved that a retired teacher still visits Grace Miller twice a week to teach the fading writing art. She recalls having eighth grade students who couldn’t read cursive.

“I just couldn’t believe that,” she recalled. “How are you going to be able to sign your name? Not everything is e-signature.

“We’re very lucky to have a former teacher come in; that makes me very happy.”

And parents should be very happy that they have a new principal and leader, who has one foot firmly planted in the successful teaching methods of the past and the other deeply rooted in the future, using technology and other breakthrough-thinking to further progress and advancement of the next generation.

LaVerneOnline.com is the community’s No. 1 source for news. It’s is also the home of TheReal Dirtt, the insightful real estate column by La Verne Realtor Colleen Bennett,               Sotheby’s Int’l Realty (DRE#01013172) who always looks forward to addressing your real estate questions and concerns. You can reach her at 909.374.4744.