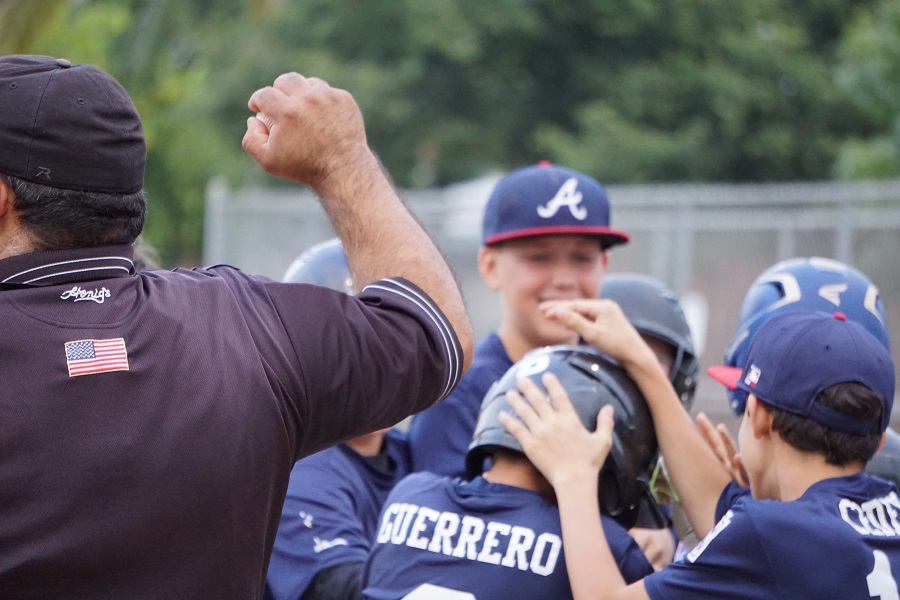 Elijah Guerrero almost had his head taken off after smashing a three-run homer.

LA VERNE, Calif., June 1, 2017 — On a cool night at the Kirk B. Johnson Memorial Pelota Park in La Verne, the Major Division Atlanta Braves proved they just might be the hottest team in the playoffs, defeating the always-tough Cardinals, 13-8, on Wednesday night.

The Braves got out of the box early on a one-out two-run single by Richard Maryanski, plating both Dan Munoz and Clayton Roland, who had doubled earlier.

In the bottom of the inning, the Cards answered with an RBI single from J.T. Reilly, cutting the Braves’ margin to 2-1.

In the second inning both teama went quietly. Indeed, the Cards’ Tyler Holley struck out the side. 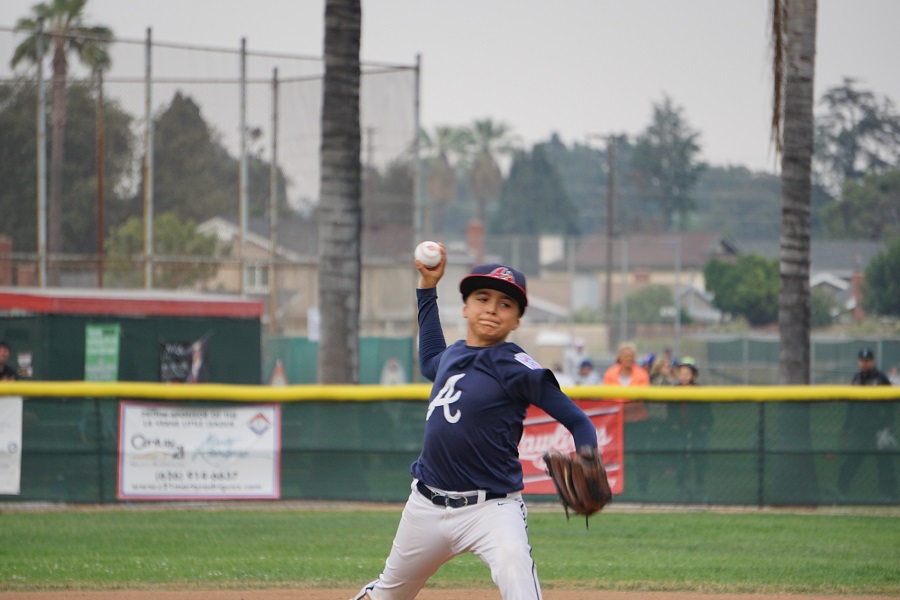 The third inning was a far different story, however.

Following a pair of free passes to Anthony Cedeno and Munoz, Elijah Guerrero clubbed a three-run homer, giving the Braves a 5-1 lead. Before the Braves were through, they pushed across two more runs to expand their lead to 7-1. One of those runs came on an RBI single by Adrian Cedeno.

The Cards responded with five runs of their own in the bottom half, the big blow coming on Morgan Smith’s monster three-run homer. Both Gabriel Granados and Lucas Szabo doubled in the inning to further help the Cards’ cause. At the end of three, the score stood 7-6 in favor of the Braves.

In the top of the fourth, the Braves benefited from six free passes before order was restored. The Braves collected only one actual hit in the inning — a single off the bat of Jhett Buggle — but the damage was done, and the Braves went up, 13-6.

Morgan Smith stands atop second base, waiting for a teammate to drive him in.

The ever-resilient Cards got two of those back in the bottom of the fourth. Parker Smith and Holley each singled for the Cards, and the team would go on to load the bases with two outs, but they left the runners stranded, cutting the rally short.

Entering the fifth inning, the Braves led 13-8, and that’s how the score remained as pitching dominated the rest of the way.

For the Braves, Guerrero led his team with 4 RBIs, followed by Maryanski who had three. Catcher Micah Smith walked all three times he came to the plate.

For the Cards, Morgan Smith added a single and an intentional walk to his three-run homer. J.T. Reilly had a pair of singles on the night.

So that you’ll never miss a big La Verne news story or interview, subscribe to the monthly LaVerneOnline Update, found on the front page.