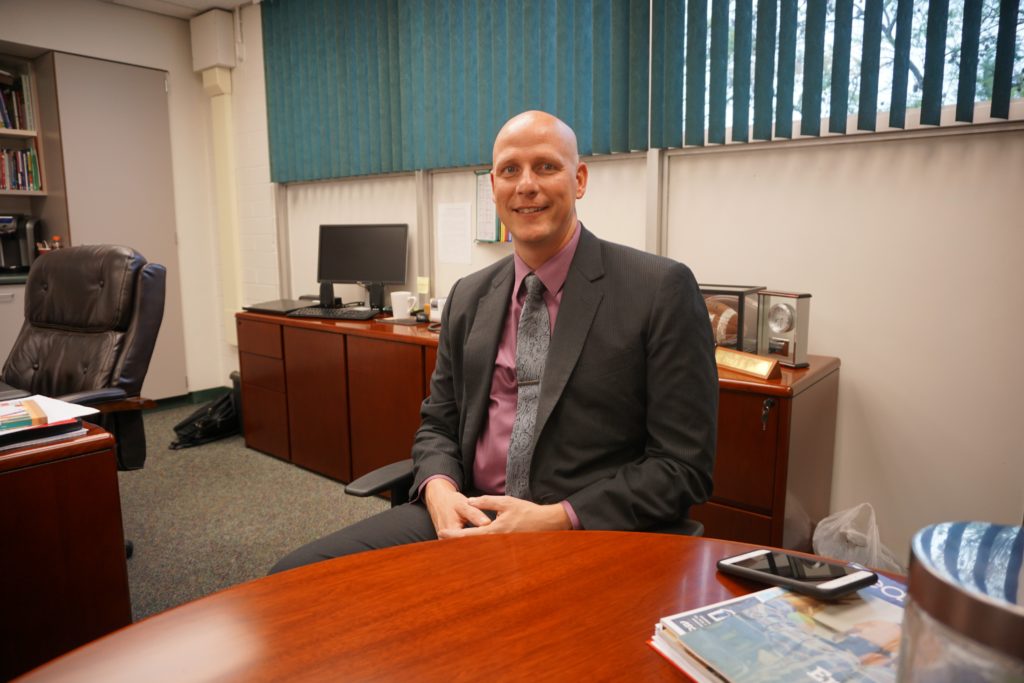 Bonita Principal Derek Bub thought he was going to be an FBI agent and still dresses like one, but he decided to become Bonita’s educational sheriff instead.

There’s a new education sheriff in town, and his name is Derek Bub, principal of Bonita High School.

Actually, he took over in the fall of 2015 from the retiring Bob Ketterling who masterfully guided Bonita for 17 years as principal.

In handing over his duties and responsibilities to Bub, Ketterling’s advice was succinct: “Here are the keys to the Mercedes; take care of it.

From all early indications, that is exactly what Bub has done.

The ex-math teacher and Chino Hills football coach who later led Chaffey Union District and Etiwanda High Schools as an assistant principal has quickly established a reputation as an innovator.

“My advice to my teachers is if you think something is going to work, try it,” he said. “If it fails, adjust, evaluate; try it again.”

If he were still donning his football coaching cap, he’d be known as a player’s coach. Instead of hiding and posturing behind his desk, he’s out on campus or in the classroom, asking teachers what they need to be successful, even if that means helping them carry out the trash.

A couple of years ago, Bub was invited to Google headquarters in Mountain View, Calif., where he observed first-hand how Google engineers are re-imagining and designing the world that will exist 10 years or even a quarter century from now.

In response, it’s no coincidence that Bonita offered in the fall for the first time a computer science class taught by Dr. John McGarvey. More than 200 students tried to enroll in the class.

“Instead of simply offering another class, we’re trying to open doors for different groups of kids,” Bub explained.

The Bearcats campus is also the home of an elite automotive technology program headed by Priscilla Englert. The STEM (science, tech, engineering and math) curriculum gives students the tools and applications they need to accelerate toward high-paying auto tech careers.

Meanwhile, the longtime freshman core program has given way to APEX, an honors program that challenges students to move beyond their texts and apply their learning to real world challenges. All students in the program take biology their freshman year, which provides them with the foundation to explore more advanced science classes in their later Bonita years.

“Again, we’re trying to open doors for kids,” Bub said. “If we can start that fire in kids while they’re still here at Bonita, we’ve succeeded.”

In the not-too-distant future, Bub envisions all students opening laptops instead of textbooks for their daily instruction and coursework.

He’s spreading his educational bets around, however, by encouraging students to participate in extracurricular activities that let them further develop their interests and passions.

“How do you prepare students for jobs that don’t exist yet?” Bub asks. “That’s a challenge.”

Some of the biggest extracurriculars on campus, of course, are the various sports programs. Earlier in his career, he saw himself as a football coach lifer whose value and tenure were tied to Friday night wins and losses that were constantly critiqued in the Saturday morning papers and blogs.

Now freed from half-time, locker-room speeches to rally his team, he’s sees a bigger field that goes beyond the goal posts. He simply wants to put students (and the school’s coaches) in positions to be successful.

A parent himself, with two young daughters, Bub also has empathy for over-zealous parents looking after the best interests of their children, especially when it comes to their playing time and earning a starting position.

He related this story a mentor had shared with him early in his administrative career:

“When a big fire breaks out and everyone’s been told to leave by the fire department, you always have this one guy who refuses to leave, watering down his roof with his garden hose. If people are going to do that for their own house, what are they going to do for their kids?”

To break through to these few parents, Bub emphasizes good communications, not rants or grumblings fired off anonymously, but a face-to-face sit-down or a simple phone call.

“Sometimes, it’s just a conversation to explain this is how and why we do something,” Bub explained. “I’m not afraid to have those conversations.”

Bonita has the systems, programs and outlets, including anonymous tip lines, for students to express themselves. Potentially explosive and intense situations are further defused, with Bub out on campus, his ear to the grounds, encouraging communication.

Surprisingly, students easily walk up to the man in the suit – a vestige from his Northern Arizona University college days when he majored in math and criminal justice and was dead set on joining the FBI. Usually, the conversation starts off, “Hey, Bub!”

He turns and gives them his attention. He may be the principal, but he got there by talking their language.

Bub’s test drive of the Mercedes has been successful, and now he’s looking to blaze new paths and take Bonita to new heights.