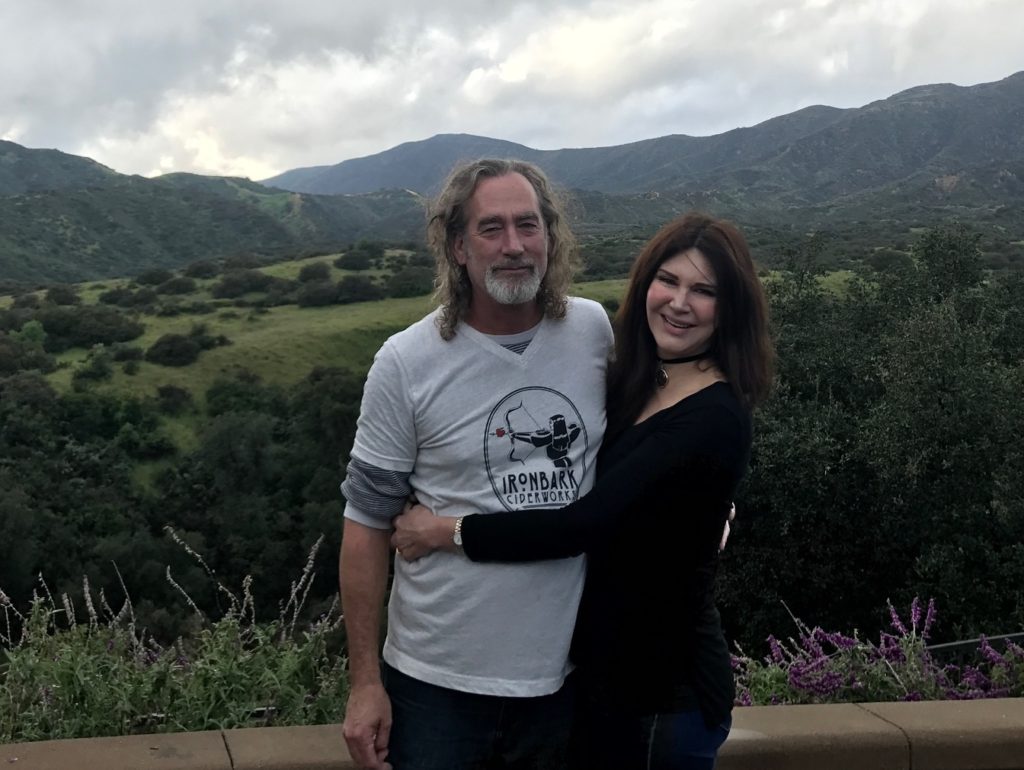 Jim Coffman and Catherine Fleming enjoy a moment in their canyon-facing backyard.

After closing one of the world’s most successful body jewelry manufacturing businesses in December 2015, ending a two-decade run that earned millions of dollars annually and employed 86 people at its peak, Claremont resident Jim Coffman and his career are clearly on the rocks.

Now he is in a state of monolithic madness, turning away from creating counterculture jewelry that his fans used to pierce their noses, lips, chins, ears, belly buttons, toes, tongues, nipples and navels to alternately hewing hallowed and haunting forms and faces out of rocks and boulders weighing thousands of pounds.

His work has gone from the minuscule to the massive, a mash-up of Stonehenge meets Easter Island by way of Machu Picchu and the Pyramids of the Sun.

“I love ancient things,” Coffman said from his Albert Stewart-designed home that he shares with his wife Catherine Fleming on a verdant ridge offering spectacular views of the Claremont Wilderness foothills.

The entrance to his living quarters is at once a cultured and cluttered garden of ruins, honoring bygone eras and epochs where his soul feels strangely at home.

Despite travels that have taken Coffman to exotic locales around the world, the artist is very much both a product and a harbinger of Claremont’s bohemian culture.

At age 8, he recalls looking down a manhole and yelling to the phone company crew working below the street whether he could have some of the wire they were installing or replacing.

“They gave me this huge section of new wire and I scurried home to show it off to my brothers,” said Jim, who grew up along Baseline Avenue.

Soon, he was turning up at school selling his “wire” rings to his classmates.

Fed up with high school at age 16, or as Coffman said, “It wasn’t for me,” he took and passed the California high school proficiency exam and appealed to become an emancipated minor, meaning that with his parents’ approval, he could assume most adult responsibilities, including signing legal documents.

“I’m still not sure how I got my parents to sign off on that,” he said.

With high school behind him, he worked at Bud’s Bikes in Claremont and ventured out, whenever he could, on long bicycle excursions, including pedaling by himself all the way to Canada. 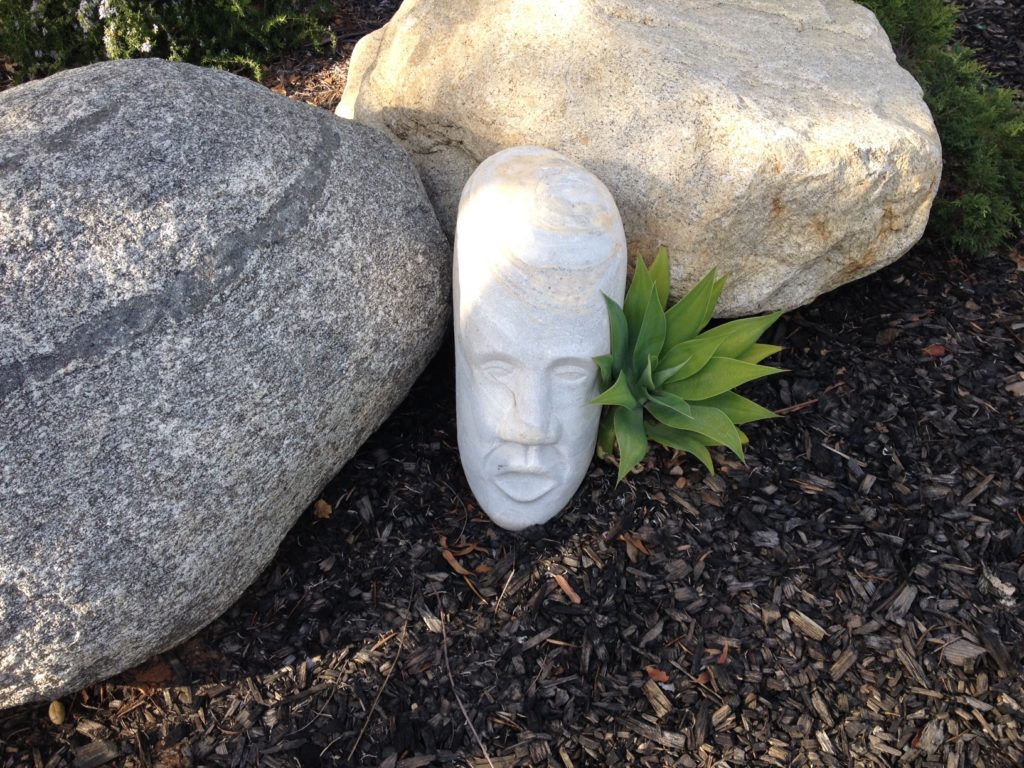 One of Jim’s works is caught between a rock and a hard place.

In his mid-20s, steered by some influential friends, he redirected his course to Citrus College and then in the late 1980s, he was accepted into Pitzer College’s New Resources program, designed for students of non-traditional age, backgrounds and interests.

The program must have been conceived with Coffman in mind because he had been working at Figg Jewelry in Claremont, where he and about 25 other locals learned the craft and trade of making handmade jewelry.

“It was handmade, hammer and anvil stuff,” Coffman said. “We didn’t cast anything, it was all made from scratch.”

Meanwhile, in college Coffman became fascinated with pre-Columbian history, art and culture and graduated with a dual degree in environmental studies and anthropology in 1991.

His newly minted degree, however, counted little in a job market that had been devastated by aerospace layoffs that same year, in which California shed 333,000 jobs, 208,400 of which were in Los Angeles County.

Newly married, Coffman entertained his options, either work eight weeks for free on an archaeology dig and hope to get into a master’s program or look for government work.

“To go on with archaeology or anthropology, you had to be either rich or incredibly brilliant,” Coffman recounted. Considering himself neither, the self-effacing Coffman applied for a civil service position as a waste control inspector, a job that attracted about 300 other applicants.

After placing in the top 10 in the civil service exam, Coffman gained an interview, but when he asked about the competition he faced, he was told he was up against PhDs with 20 years of experience.

“So there was no chance,” Coffman told himself.

After looking for work for six months and watching his rejection letters pile up, he fell back on what he knew best, jewelry-making, and leased a 190-square-foot space next to a friend’s shop for about $100 a month.

“It was just wing-and-a-prayer kind of stuff,” Coffman said, about his decision to go into business for himself. With few other career options, he began hammering out a few silver pieces and perusing pawn shops for discount diamonds, trying to scratch out a subsistence.

At the time, his first wife Stephanie was the bread winner, but when her boss wouldn’t grant her a three-day extension on her maternity leave so she could attend her brother’s wedding in Hawaii, she told Coffman she could no longer work for such a person.

Then she came straight out and asked him if he would be able to support her and their new child.

“I promised her I could make it work,” Jim said. “That’s when I started working 14 hours a day.”

Working tirelessly, he kept meeting more and more people – and more by chance than design – including someone who had an in with another growing business, Montclair-based Hot Topic.

Getting his toe in the door

He heard that the company needed to fill an order for toe rings. At the time, body piercing was new to Coffman. The practice of puncturing or cutting a part of the human body to create an opening in which jewelry could be worn initially disturbed him.

“It sounded gross, I didn’t want to do that,” Coffman said. “The first time I saw a body piercing, I was sure he had his skull wired together.”

Then his new contact came back and said Hot Topic was having trouble filling other orders. After seeing some of the pieces needed by Hot Topic, and what the counterculture company was paying for them, Coffman told his friend he could handle the work.

Every year thereafter, Coffman’s business, named “Tears of the Moon,” an Inca metaphor for silver, doubled in size.

“We got up to $3 million in revenues real quick,” Coffman said, adding that his company likely produced about 26 million pieces during the time he was in business.  Half of his company’s profits went to the employees’ profit-sharing program.

During his company’s heyday, the only tears being shed were Coffman’s because as he kept adding staff, with more managers, coordinators and assistants controlling the production process, he missed the day-to-day experience of working with his hands.

“I have to be creating something every day,” Coffman confessed.

So to keep his sanity, he began sculpting at his one-and-a-half acre Montclair manufacturing plant. “At the time, it wasn’t something that was profitable, it was just something I had to do,” he said.

As for managing a business, that was the easy part.

“He can run flow charts, balance sheets and spreadsheets in his head,” Catherine said.

But one flow that became harder to control was increasing price competition from China. Faced with global market realities and shrinking profit margins, Coffman began sending some of his designs overseas to be fabricated.

“By the time we sent them the new designs, new product was already on the street,” he said, imitating a big sucking sound to indicate the widespread theft of intellectual property he could do nothing about. Unfairly or not, Tears of the Moon could no longer offer Hot Topic the long-time competitive advantage over its rivals in the pop culture accessories market.

“We had always been Hot Topic’s secret weapon in a sense,” Coffman said. “We could create hundreds of designs and give them a three-to-six month head start on their competitors.”

Tears of the Moon slowly began shedding employees and auctioning equipment. He finally shuttered the doors to his plant in December 2015.

“It was a shock,” Coffman said. “Laying off loyal employees was really hard. There was a lot of crying.” 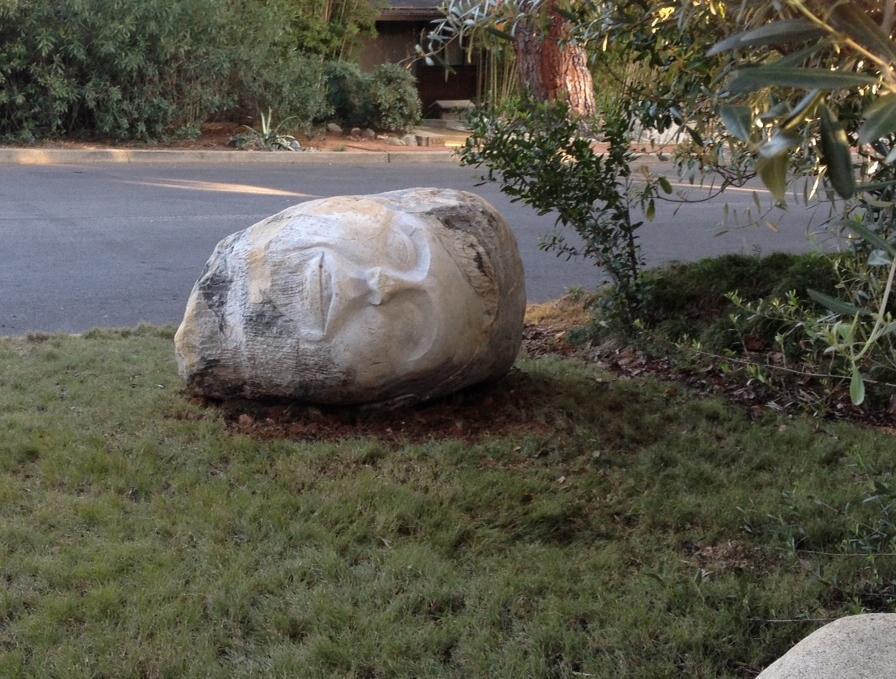 Unlike jewelry sets, massive boulders that have been forged and formed over the eons, are a little harder to rip off. Then there are Coffman’s time and unique creative qualities to consider. Creating one piece can take hours, days and sometimes years. There’s no definite start or end with many of his projects. They almost take on a life of their own. There’s no telling when the last mallet and chisel movement will be struck. Moreover, Coffman’s creations can’t be easily catalogued or corralled by competitors. Some, in fact, just lie on their side, only partly emancipated, made immovable by their extreme tonnage.

Outside of his Claremont artist colony’s home and jewelry-making building that he still owns in Montclair, you need a certain serendipity to find his work. For example, a towering nine-foot-tall “Silent Giant” stands in an Upland front yard. A dolmen (a type of  ancient tomb, usually consisting of two or more vertical megaliths supporting a large flat horizontal capstone) sits on 12th Street off Indian Hill. His work can be found in the Rancho Santa Fe Botanical Gardens in Claremont, as well.

His 5-foot-6-inch “Pagan Madonna,” her hands gently clasped over her chest, symbolizing a holiness of the heart, has also found a home in Claremont.

For two years, you could find Jim chipping away as the featured sculptor at the Millard Sheets Art Center Gallery at Fairplex in Pomona.

“My work can scare some people because it’s so heavy and big,” Coffman concedes. “I could give it away, but people might be shocked to learn it costs $1,200 to move it.”

Coffman doesn’t discriminate when it comes to working in stone. Marble, limestone, sandstone, onyx, even meteorite, are all media he uses.

For a Planetary Society fundraiser, he created a meteorite lapel pin for Bill Nye, “the Science Guy.” Claremont resident Robin Young helped set it up.

His work seems to know no bounds and his thinking could best be described as free form, as evidenced by his latest artisanal venture to join his wife Catherine, his original high school sweetheart, in soon opening a cider company in downtown Claremont.

Chiseling and cider-making should make for an interesting love pairing.

Down the street from the Coffmans, inside and outside the home of his good neighbor Christine, many of Jim’s treasures are on display.

Asked to describe his contribution to Claremont and the greater art world, before she could answer, Christine’s friend who was visiting from New York and was well familiar with Coffman’s work, offered her opinion with unquestioning certitude.

“He’s a pillar of the community.” 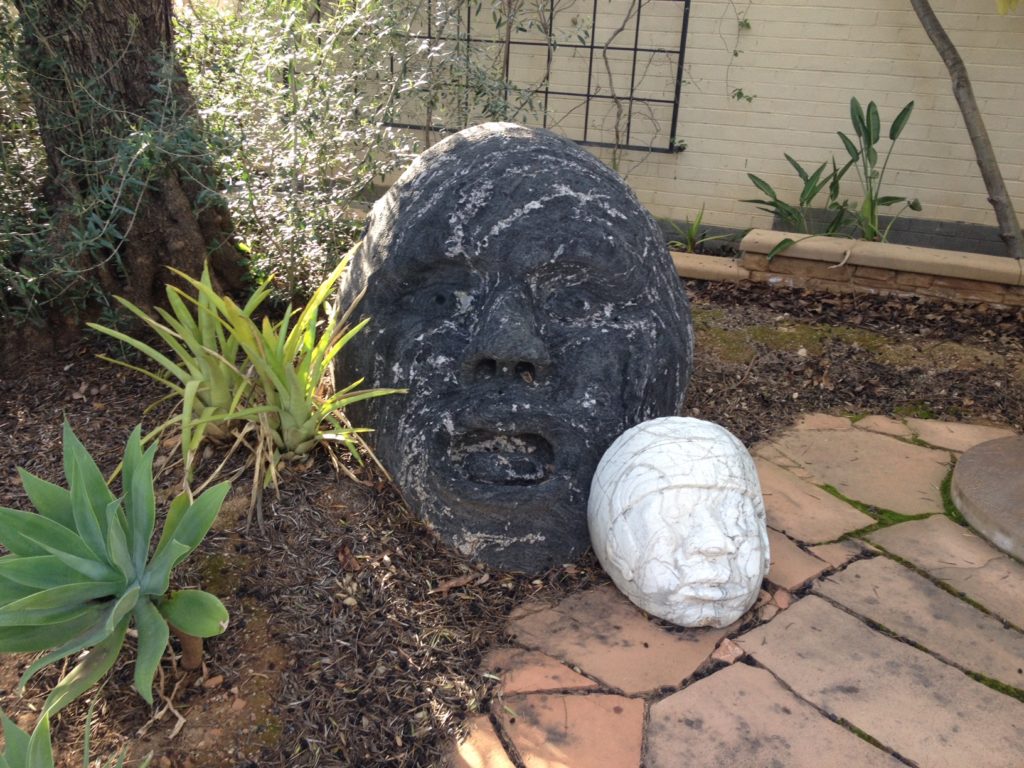