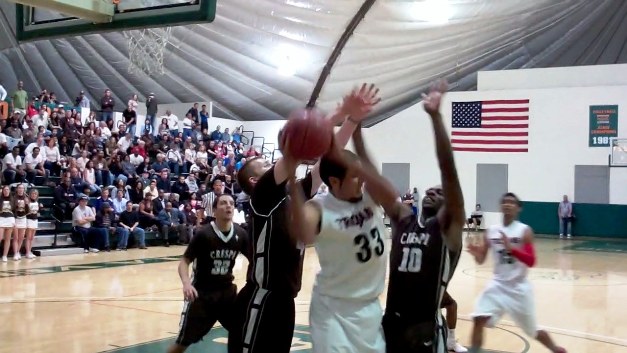 Grant Jerrett was double-and triple teamed all night and still managed to lead all scorers with 17 points.

There’s a new saying going around La Verne, and it’s called the Trojan Touch, after the back-to-back state champion La Verne Lutheran Trojans survived yet another last second shot to prevail 51-49 over Crespi in the CIF-Southern Section 4AA seminfinals at the University of La Verne on Friday night.

Trailing by 10 at the start of the fourth quarter, Crespi narrowed the lead to four points, 43-39 with 1:32 left when Brian Beard drained a 40-footer with the shot clock expiring, putting the Trojans up, 46-39.

The next trip down the court, Beard bounced the ball to a cutting Cameron Osorno who scored on a lay-up to give the Trojans a 48-39 lead.

Providence may indeed have had a hand in the outcome because Crespi went on a closing 12-2 run, falling two points shy of tying the game when it couldn’t get the last shot to drop.

After the Trojans’ escape, Cooper said he wouldn’t have been surprised if the game had gone into overtime.

“It’s been like that all season,” Cooper added. “We had a quadruple overtime, we had two double-overtimes. If he would have made that and it went into overtime, it wouldn’t have fazed me.”

With the Trojans clinging to a two-point lead with 14.5 seconds remaining, the Celts intentionally fouled Grant Jerrett, sending him to the line. Grant, who led all scorers with 17 points, had been steady from the line. In fact, Cooper ran an in-bounds play to get the ball into the hands of his McDonald’s All-American.

“That’s all you can do is go by the percentages, and the percentages said Grant is going to make his free throws,” Cooper explained. “But in basketball you never know.”

One thing that is certain, however, is Cooper’s players have the golden touch, always finding a way to win in the biggest games.

The two-time defending state champions (24-6) will play Serra, a 70-63 winner over Price, next Saturday at the Anaheim Arena. Tip-off time has not yet been determined.