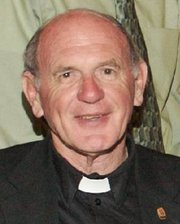 Late Wednesday afternoon, Father Patrick Travers, who was dumped by Damien in late July after serving the school for 49 years, confirmed that he is serving as the interim administrator for Holy Innocents Catholic Church in Victorville, Calif.

In a sense, he’s back among friends. For the past 16 years, in addition to his principalship at Damien, Travers would drive from La Verne to Holy Innocents on Sunday and perform mass for the congregation of about 3,000 families. So, he knows the parish well and it knows him well.

“I’m really looking forward to this,” Travers said. “They just lost their priest to whom they were really attached, so they’re hurting, and I just left the school I’ve been a part of for the past 49 years, so I’m hurting.

“We’ll be crying on each other’s shoulders.”

Despite his abrupt dismissal from Damien by the Congregation of the Sacred Hearts of Jesus and Mary for what many speculate were Travers’ missions to Morita, Mexico (south of Tijuana) to build houses for the town’s poorest residents in defiance of the Archdiocese of Los Angeles’ policy due to Mexico’s ongoing drug violence, there appeared to be no bitterness in Travers’ voice.

“I’m beginning the second half of my life, however long that lasts,” said the 74-year-old Travers, who battles diabetes, a heart condition and bad knees.

For Travers, his Victorville assignment will be slightly less hectic than the pace he’s maintained over the past decades. After leading Damien during the school week, he would drive to Morita, Mexico every other Saturday to give mass and then on Sunday drive up the I-15 to Holy Innocents to give mass there.

Upon seeing Travers, Holy Innocent’s secretary asked what day he wanted off. “What’s that?” Travers replied.

Travers will perform masses in English and Spanish, although he doesn’t speak Spanish. “I’ve trained myself to read Spanish,” he said, adding that he’ll work to improve his bilingualism. “I’ll keep plowing on.”

Regardless, he won’t be able to completely suppress 49 years of memories he’s collected from the Damien High School campus, especially with the start of another academic year, not to mention the football and water polo seasons here.

It’s also just a little odd, given the basketball gymnasium and event center is partly named after him, but again Travers understands the dynamics at play.

“It would just regurgitate everything,” he said. “It’s like a bad divorce because you can’t see the kids.”

But Damien’s loss may truly be St. Innocent’s gain. The village of Morita also may come out a big winner. Travers said Holy Innocents and the San Bernardino diocese have embraced his desire to continue his service in Mexico “This parish is extremely supportive of the Tijuana mission,” Travers added.

Having experienced so much turmoil over the last several weeks, Travers might have new material for his homilies, it was suggested. “I think I’ve told them most of my stories,” he said.

But there are new chapters to be written

“I feel like I’m coming home,” said Travers who lives in a rectory about a mile from the church. “I’m looking forward to it.”