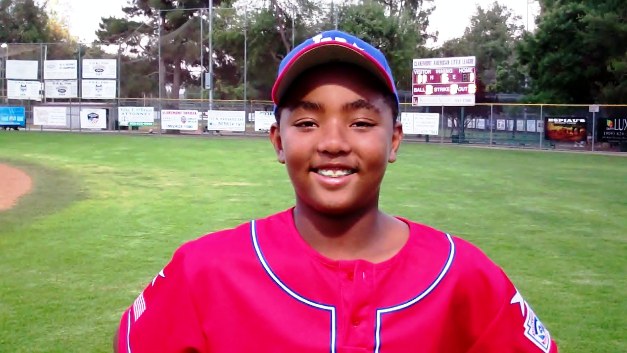 Apparently, nobody told the La Verne Little League 12-year-old All-Stars that the 4th of July isn’t until next week.

Last night at College Park in Claremont, La Verne exploded for 11 runs and 13 hits, including five home runs, including two from clean-up hitter Kenji Henderson, who went 4-for-4 and knocked in a game-high four runs.

Kenji also lit the fuse early for La Verne in the top of the first, driving in A.J. Woodall with a two-out RBI single to get the post-season started for La Verne.

Meanwhile, on the hill, Woodall surrendered just one run to go along with nine strikeouts before giving way to closer Anthony Cascarano.

La Verne led just 1-0 entering the top of the third. La Verne pushed the margin to 4-0 on a lead-off home run left the park faster than Prince William and Kate Middleton could say “I do.” Then after shortstop Nick Peifer got aboard on an infield single, Henderson smashed the first of his two home runs.

Claremont scored its only run in the bottom of the third on a single by Harrison Spohn to drive in Ryan Swift. Despite scoring just the one run, Claremont banged out seven hits but just couldn’t muster any real attack against Woodall. 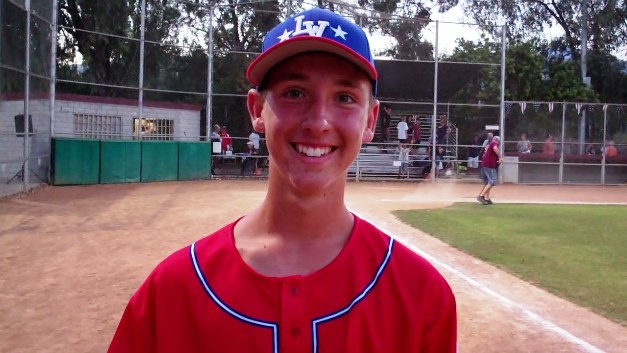 A.J. Woodall mowed down Claremont with his blazing fastball and offspeed pitches.

La Verne put an exclamation point and a cherry top of their winning performance with two more runs in the sixth on back-to-back home runs from Cascarano and Henderson. Schneider and Jake San Miguel also singled in the final inning.

Surprisingly, the team didn’t get too excited after the victory, realizing the road to Williamsport has many casualties along the way. “We may win, we may not; we’re just taking it one game at a time,” said the winning hurler Woodall, mature behind his years.

Acknowledging that his game against Claremont was a career high, Henderson also seemed to take the victory in stride, preferring to talk about the joy of playing centerfield watching Woodall strike out all those batters. “You really don’t have to play much defense at all,” Henderson said.

When the real 4th of July gets here next week, you can bet the boys will still have a lot of firepower left. Monday’s 11-1 explosion against a good Claremont team was the just the pre-game show. There are still lots of fireworks ahead.