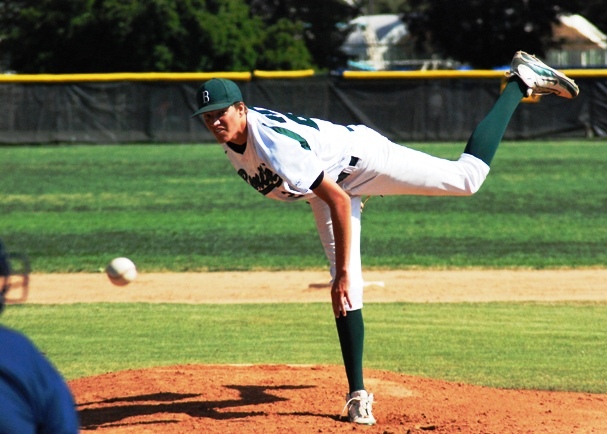 Arizona State-bound performed well in a bullpen session, which bodes well for his 2011 Bonita debut in about two weeks.

Beckman twirled a four-hitter, handcuffing the Bonita hitters throughout the fast-paced game. KC Huth scratched out two infield singles for the Bearcats. Matt Gelalich and Mark Lindsay also singled for Bonita. Only one Bearcat reached third base against Beckman who had six strike outs and didn’t walk a batter.

After Bonita went out in order in the top of the first, Glendora scored two runs in the bottom half of the inning on home runs by Cooksey and Salgado. First baseman John Alexander also sent a shot 360 feet before centerfielder Gelalich hauled it in at the fence.

“In the bottom of the first, they got two solo home runs, and that just dictated the tempo,” said coach John Knott, whose Bearcats dropped to 10-3 with the loss. “It was a pretty impressive showing by Glendora.”

Although Bonita starter Daniel Tessone had a shaky first inning, Knott didn’t fault his pitcher for the loss. “When you don’t score any runs, it’s pretty much irrelevant.”

While Bonita was trying to figure out Beckman, Glendora was putting together good swings. The big gun for Glendora was Regis. He had RBI singles in the third and fifth and the three-run bomb in the bottom of the sixth to end the game. Alexander also finished up with a double and an RBI single.

“Glendora gets all the credit,” Knott said. “They had quality at-bats, every guy went up there with a plan, and was extremely aggressive and productive.”

The Bonita bats continue to slump. The team entered the game with a .277 batting average.

“We’re pulling a lot of pitches right now,” Knott said. “We’re not showing a lot of discipline. We’re not looking to hit the ball the other way the way we normally do.”

The Bonita program has been one of the best in the area for several years running, so opponents are saving their best matchups for the Bearcats.

“Nobody will feel sorry for us,” Knott added, “and San Dimas will come out and try to do the same thing against us tomorrow.”

Bonita, however, figures to retain its edge with the anticipated return of Arizona State-bound pitcher Adam McCreery, who is about two weeks away from rejoining the staff. He threw a bullpen session before the game and looked strong, according to Knott.

Bonita returns to the diamond in less than 24 hours at Arcadia High School to face San Dimas. In their mid-March matchup against the Saints, Bonita prevailed 3-1. Justin Garza, 4-0 with a 0.42 ERA, is expected to take the hill for Bonita.

After the game, head over to the Pizza Barn. Every Wednesday, it’s all-you-can-eat spaghetti for $3.95!