One of my books was published last week.

I don’t mention this necessarily expecting you to run right out and buy the damn thing (okay, that’s a big fat lie, of course that’s what I expect), but rather I mention it as a relevant prelude to a rather beautiful day at beautiful Santa Anita Park just last Saturday.

Why relevant?  Because the book, entitled WHERE GODS GAMBLE (available for you now in both paperback and hardback) is partly about life at the racetrack. 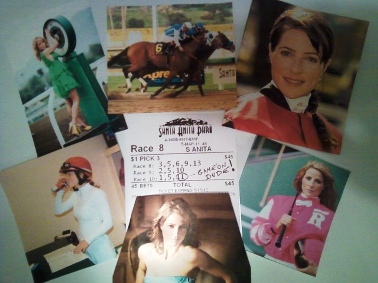 And why was that beautiful day at the track so doggone beautiful?  Well, let’s just say it was a very strange day, a day where a bunch of really wonderful things happened that had really never happened to me before.  At least not quite in the same wacky way they happened.

Glad to explain.  First of all, I hadn’t been out to Santa Anita all year (which is weird in itself), I just haven’t been into the track like I have been in years past, probably due to the fact that I’ve been so busy shaping and editing and preparing my book to go into print.  (Did I mention its called WHERE GODS GAMBLE, published by iUniverse Inc. and that it’s available in both paperback and hardback?)  Second of all, Saturday was the day of Santa Anita’s biggest race of the year, the Santa Anita Handicap, or the “Big ‘Cap” as we track insiders call it.  So there was a lot going on.

Things started out calmly enough.  I didn’t even make a bet on any of the first five races I was there for.  I was out of practice.  I was also unusually tentative, downright hesitant.  Then I made a couple losing bets, nothing outlandish, then another loser, then another, I just couldn’t get into it.   Before I knew it I was stuck a couple hundred bucks.  But I didn’t care.  I really wasn’t even in the mood to be at the track.  I guess I was distracted by more important things, diverted, preoccupied, jazzed.  It’s not every day a guy’s book makes it into print.  (By the way, all you have to do to obtain a copy or two is go to iUniverse.com and punch WHERE GODS GAMBLE into the search bar and follow directions.  Or do the same thing on Amazon.com if you want.  Thanks in advance.)

Anyway, now bored and tired in addition to being a lot lighter in the wallet, I almost left for home and a well-deserved nap, but, after all, it was Big ‘Cap Day, and there are a lot of people—including myself—who I would have had a very hard time explaining to exactly how I could possibly go to Santa Anita on Big ‘Cap day and not even stay for the Big ‘Cap.  My reputation as a lifelong track hack was at stake.

So I stayed.  Besides, I did have one live ticket still in my pocket, a “pick-three” on races 8, 9, and 10, the 10th being the upcoming Big ‘Cap itself.  A pick-three is where you have to have the winning horse in three consecutive races, a difficult ticket to cash, sort of a poor-man’s Pick Six.  But it usually pays pretty good.

Fast-forward to the race.  Nothing special to report until the horses turn into the stretch.  This is where it gets interesting.  You have to understand up front that I didn’t expect to win.  I’d lost every bet I’d made so far.  And all day, reading the Racing Form in search of winners, I didn’t feel like I had any “feel” or “touch” at all.  And of course I hadn’t been to the track all year.  Why would I expect to win?  I had even positioned myself at the top of the stretch to watch the race, near the exit, not because that was a particularly good place to watch it, but rather because if and when I lost I would be a great deal closer to my car in the “media only” parking lot located nearby!  Talk about a defeatist attitude….

One of the three horses I had going in the race actually took the lead entering the stretch.  A four-year-old gelding with a cool name; Game On Dude.  But I didn’t think much of it.  For one thing, Game On Dude was a rank outsider at 14-to-1, and there were horses challenging him from all sides.  For another, my jockey was a girl.

To my colossal surprise, Game On Dude runs his heart out and hits the wire in a desperate photo finish with this other longshot; it’s too close to call!  I begin to feel downright elated!  I had checked before the race, and a 1-dollar pick three with Game On Dude winning paid $384 dollars, and I have it four times.  Big money on the line.  However, almost immediately, track announcer Trevor Denman drones portentously, “Ladies and gentlemen, please note there will be a stewards’ inquiry into the stretch run of this race, please hold all tickets.”   Great.  Just great.   This close to a huge pick-three triumph, and my horse has to commit a foul in the biggest race of the year.  Serves me right for betting on a girl jock in the Big ‘Cap, I say to myself.  Sure enough, on the replay shown on the track’s T.V. monitors Game on Dude can clearly be seen knocking around the favorite, Twirling Candy, like he’s auditioning for a movie about street hockey or roller derby.  It’s pretty obvious my horse’s number is coming down, regardless of if he wins the photo finish or not.  I’ve never had any luck with inquiries.  Unless you count bad luck.  Historically, they always seem to go against your beloved Sports Philosopher.  I actually find myself hoping I lose the photo finish, just to put me out of my misery….

No such luck.  Game On Dude wins the photo.  He’s the unofficial winner of the Big ‘Cap.  For the moment.

The inquiry goes on forever.  They run the replay again and again.  Every time they show it the crowd groans.  After all, over a quarter of a million bucks had been wagered on Twirling Candy; people were angry.  I even notice that Twirling Candy actually initiated the contact, but I figure the stewards will either not notice or not care about that.  Twirling Candy may have hit Game On Dude first, but Game On Dude hit back twice, and much harder.  And Twirling Candy finished up the track as a result, badly beaten.  I figured I was screwed.

But amazingly, twelve minutes later (and for an inquiry, twelve minutes is an eternity) Denman finally declares, “Ladies and gentlemen, the stewards have ruled that there will be no change in the order of finish….”

My horse beats up another horse in plain view with big money at stake and yet they leave my horse’s number up?

And did I mention that my horse’s jockey was a girl?

None of this has ever happened to me before.

Let me put this into proper perspective for you: In my recently-published novel WHERE GODS GAMBLE (now available in hardback and paperback through both iUniverse.com and Amazon.com), I mention on page 164 that the winning jockey in the Big ‘Cap in 1980, the year in which the novel takes place, was Bill Shoemaker, maybe the greatest rider ever.  Conversely, this year’s winning Big ‘Cap jockey….is a girl!

Actually, all joking aside, this girl jockey of mine is pretty good.  Her name is Chantal Sutherland, and she’s won over 450 races worldwide, including some fairly major stakes races.  She’s also quite beautiful to look at, doubles as a model and an actress in her spare time, and was once named one of the country’s “100 Most Beautiful People” by People magazine.  An impressive individual, no matter how you look at her.

But she’s still a girl.  Man, this whole thing was weird.

How could this happen?, I ask myself.  How could I possibly survive both a photo finish and a stewards’ inquiry—two things I have never been even marginally successful doing—to bag over $1,500 dollars on a race as big as the Big ‘Cap by trusting my selected horse’s fortunes to a girl???  And what about all of this bizarre stuff happening the same exact week that my novel is published???  (WHERE GODS GAMBLE, on sale now).   This thing was starting to take on a mystical quality beyond my powers of comprehension….

Then I remembered.  Saturday was the seventh anniversary of my brother Chris’ tragic death in an automobile accident.  That’s right, March 5th; ‘same day as this year’s Big ‘Cap.  Furthermore, I recalled that the accident happened at the 210 Freeway and Baldwin, Baldwin being—as any veteran race-goer knows—the very off-ramp of the 210 one takes to go to Santa Anita.

I also remembered that  Chris and I went to the track together several times growing up….okay, make that about four hundred times.  We handicapped literally thousands of races together.  My first thought was that if he ever caught me betting on a girl jock in the Big ‘Cap he would literally have reamed and ridiculed and ragged on me for the rest of my life.  But then I got to thinking….could he possibly have been behind all this?  Could he have turned Chantal Sutherland into Bill Shoemaker just long enough for her to drag Game On Dude across the wire in first?   Could he have monkeyed with the photo finish camera?  Could he have caused that street fight between Game On Dude and Twirling Candy and made the inquiry last twelve long minutes just to aggravate me and have a good laugh at my expense, and then turned around and whispered in the stewards’ ears, “let it stand, let it stand”?  Does anyone have a better explanation?

Just to add to the craziness, after I collected my Big ‘Cap winnings I made a large show bet (meaning the horse has to come in 1st, 2nd, or 3rd) on a 20-to-1 longshot in the 11th and final race of the day.  As I was making the bet the pari-mutuel clerk, a 60-ish woman with a big cheesy grin on her face, says to me, “I saw you studying the T.V. during the inquiry—I was watching you—you looked really tense!  I could tell you had a big bet on the winner!”   I’ve been coming to the track for forty years, and I have never had a pari-mutuel ticket clerk say anything remotely like that to me.  My very own stalker.  How heartwarming.

And the jockey?  Who else.  Chantal Sutherland.

I bet I don’t have to tell you how many times in my life I’ve bet on a girl jockey two races in a row.

Maybe brother Chris did have something to do with all the glad events of the day.  He always was a pretty impish guy.  And all track hacks are superstitious animals to some extent.  Or maybe he had nothing to do with it at all.

But regardless of whether or not he’s responsible, I bet’cha dollars to donuts that wherever he is ol’ Chris is laughing his ass off….

Brad Eastland is an author, historian, film buff, undiscovered fictioneer, and a loyal fan of good-looking girl jockeys everywhere.   Brad’s other recent columns for LaVerneOnline can be found in Sports under ‘The Sports Philosopher’ and also in Viewpoint under ‘Brad Eastland’s View’.    Brad has also written 4 novels and over 20 short-stories.

*To pick up a copy of his recently published novel of life at the racetrack, WHERE GODS GAMBLE, a tale of American mythology, simply search for it on amazon.com, iUniverse.com, or bn.com….