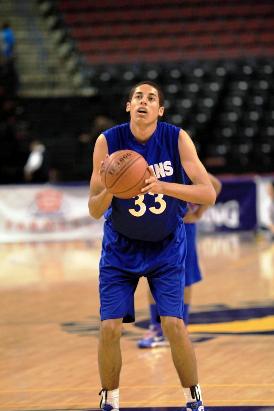 The semifinals match between Price and Lutheran on a cold rainy Friday night at Citrus College was in the end a game of mustard and ketchup.

Price mustered all the early offense and La Verne Lutheran was forced to play catch-up. After trailing by as many as 21 points late in the third quarter, the Trojans mounted a furious rally to close within two points late in the fourth period before finally falling to the Knights, 63-58.

“We needed everybody in the first half,” La Verne Lutheran Coach Eric Cooper said after the game. “We got the effort in the second half, so it shows what we can do, but we have to put together two halves.”

Down 16 points to start the fourth and final period, Lutheran went on an 18-4 tear to close within two points, 55-53, but the Trojans would get no closer as Colorado-bound guard Askia Booker sank a pair of free throws to put the Knights up 57-53. After La Verne Lutheran missed a three-point attempt, Booker was back at the line, sinking two more free throws to expand the Knights’ lead to 59-53, and that was pretty much the ball game.

The game was a case of the Trojans needing a little more mustard and, perhaps, relish, too, in that early going. “We win the game if we play hard in the first half,” Cooper said.

Somebody who played hard both halves for the Trojans was Grant Jerrett, who finished with a game-high 26 points, including a dozen in the final period when Lutheran finally caught fire and energized their fans.

“In that second half, he was huge,” Cooper said. “When he plays like that, it’s no question as to what we can do. He got rid of the fear of what’s going to happen if Norvelle (Pelle) blocks the shot and just plays basketball. But he’s just a junior. He’s coming back.”

Now all Cooper and company can do is think about what might have been and wait to see if the team earns a berth to the state tournament.

“We played with effort at the end,” Cooper said. “It didn’t fall our way. There’s nothing I can do at this point except sit back and wait and see if we go to state.”

Too much mustard by the Knights early, not enough ketchup in the bottle by the Trojans late. Ultimately, the Trojans paid the Price!

La Verne Online has more great coupons than ever. Go to the Home Page and click on COUPON to find your favorite money-saving offer.