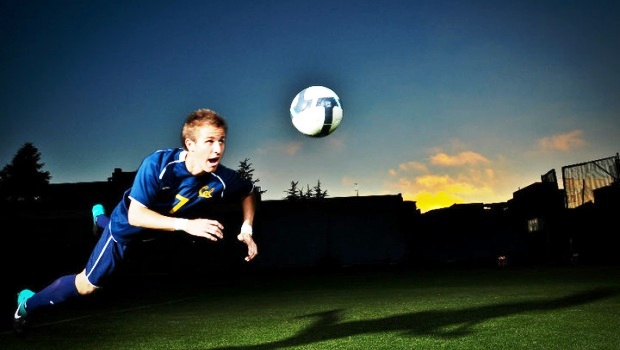 La Verne's Davis Paul, a head's-up player, on his way to the pros.

Davis Paul is like a hummingbird because he’s rarely, if ever, at rest. Or perhaps, higher up the food chain, he’s like a caged tiger, pacing menacingly, waiting to bust out of his sleepy La Verne cage and begin his career with the Chicago Fire, the Major League Soccer franchise that last week selected him in the third round of the SuperDraft televised on ESPN.

For now, though, Paul is holing up with his parents in their Upland home until January 27, the day he’s supposed to report to his new team in Chicago.

“It’s kind of weird,” said Paul, sitting down with LaVerneOnline at the D Street Starbucks on Foothill, despite being a Peet’s coffee drinker. “All my friends are going back to school, and here I’m in La Verne and I’ve got nothing to do but stay fit for the preseason.”

Paul landed in town after playing four years for the University of California at Berkley. In his just-concluded senior season, he set the Bears’ single-season assist record and led Berkeley to the Pac 10 title by virtue of his overtime, game-winning goal against UCLA in Westwood.

“I’ve never been more happy to get tackled and smothered by an entire team,” Paul said about the 1-0 season-turning victory. “I have never been happier to be at the bottom of a dog pile than I was at that moment.”

Paul is usually at the top of the heap — soccer’s top dog. A striker, Paul is equally adept with either foot, sort of like a switch hitter who is dangerous from either side of the plate. In La Verne, he was an outstanding AYSO player who decided to take his talents to travel baseball. Only when a friend asked if could fill in for a match because his soccer team was short a player did Paul pick up the game again. He went on to play with the La Verne Lazers, the Claremont Stars and the Arsenal Football Club.

“I also was fortunate to participate in a lot of great camps and play with the Olympic teams,” Paul said.

Given his high level of play with those clubs and his success at Damien, Paul’s phone starting lighting up as it came time for him to select a college.

“My dad put up a map in our hallway after the first school called,” Paul said. “After about a week, he had about 40 different schools pinned on the map.”

At Berkeley, Paul became almost as famous for his creativity off the field as on it. 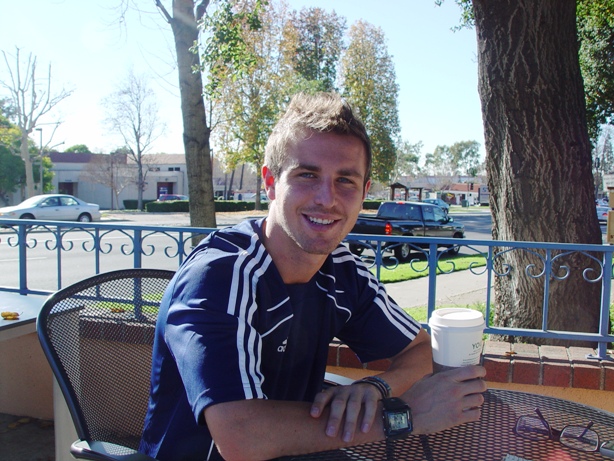 Davis Paul slows down long enough to sip the coffee.

Last October as a way to relieve the boredom of a long bus ride from Oregon to Washington, he and teammate Demitrius Omphroy (recently drafted by Toronto FC) made a music video on Paul’s iPhone. Set to Chris Brown’s “For Your Love,” the video (http://www.youtube.com/watch?v=ZuH7PiJ5x5k) took about 90 minutes to complete and became an overnight viral sensation. Chris Brown himself tweeted about it.

Paul has always has created that kind of magic. Indeed, it was at the Magic Kingdom that Paul found out that he had been selected by the Chicago Fire.

“The last thing I think I wanted to do was to sit around a living room and be hopeful and see where I was going to end up in the draft, Paul said. “That’s not my personality type.” Rumors were swirling that he was on his way to Portland, Seattle, Vancouver or another MLS team.

“I don’t like to stress over things,” he added. “It’s almost like the less I think, the better I do.”

About to board the Disneyland’s Indiana Jones ride with his fiancé, he got the call. “My phone started blowing up with text messages from friends, teammates, my parents, my agent,” Paul said.

After that moment, he didn’t have to jump on a roller coaster to experience the ups and downs of emotions. He knew his life in an instant had changed forever. Lots of stars-struck kids say they want to be a professional athlete when they grow up. He now was one.

“When you get drafted, you realize it’s a very elite number,” he admitted. “But it’s weird when you hit that goal. In many ways, this has been a 22-year goal in the making. There’s definitely some luck involved.”

And even more talent involved.

“I’m now in uncharted territory,” Paul said. “I gotta start making new goals and figuring things out. And I think definitely that’s the hardest part. Now it’s figuring out, how do I fit in at the next level and what kinds of goals do I set. Do you set them very high or just for the immediate future?

One goal is getting married to his sweetheart, Somerlyn Wood, a nursing major at Azusa Pacific University, on May 15, in the middle of MLS season. They met when they were 16. Paul is now 22.

Mid-season nuptials are a little stressful, according to Paul, but it’s when he has lots of irons in the fire, he adds, that he feels he’s at his best.

“That’s always been my personality type,” Paul said, “where I have a thousand things going on at once. So I’m not too worried about it. At the same time, every once in a while, I wonder, you know, why can’t I just be mellow for a bit?”

In the past, Paul would get away from it all by snowboarding. He’s good enough that several top companies have sponsored him over the years. (Super skateboarder and snowboarder Shaun White even asked him to come to work for him.) Now that his legs have become even more valuable, it’s unlikely you’ll see him on the local slopes any time soon.

“I guess I won’t be shredding too much more in my immediate future,” Paul said. As for the lessons snowboarding has taught him, he’ll take them to Chicago and to pre-season camp in Florida.

“Just go for it, send it, just go all in and see how it all turns out,” Paul said about his approach to life, be it on the slopes or on the soccer field. “Don’t worry about the consequences.”

The kid is on FIRE!

On his love of the game:

“Soccer is not just about scoring goals. Taking a good touch or making a good pass sometimes feels just as good as scoring the game winner. With soccer, you have 90 minutes to make something happen. We always think of soccer as kind of a blank canvas. When you step on the field, it’s kind of like, what kind of picture do you want to paint, what kind of painter do you want to be? Yeah, there are tactics, but at the same time, it’s a sport of creativity.”

“I have continually seen myself improving in different aspects. I have so much more room to better myself. I’m excited to take whatever steps to keep improving and to keep moving forward. I think some guys get complacent and stagnant, thinking, ‘I’m really good right now,’ or ‘I’m okay with this.’ But I’ve always looked ahead. I’m like, hey, if I’m shooting at 80%, why can’t I get to 90%? That’s why I’m excited about the professional level. Because I know they are going to develop me further and I’m excited to see how that translates and how I fit into the league. For all I know, I could fit in really well and do really well, or for all I know, I could have a nightmare for my first season. So, I’m just staying open. I figure if I work hard, good things will come from that.”

“Some roommates say I look like a younger Kevin Costner. I wish someone would say, David Beckham (Los Angeles Galaxy), but I don’t think that’s going to happen.”

On what he’ll most miss about La Verne.

“Pizza and Stuff’s garlic bread and Shogun and … .”

On his advice to parents hoping their child earns an athletic scholarship or makes it the professional ranks:

“If you’re having a good time, if you’re having fun with what you’re doing, then you’re going to have no problem working hard. That’s the great thing with soccer. I see too many people who are stressing and over-analyzing. Nobody makes it to the next level who hates the game. So just have fun with it while you can and if you’re good enough and you push and you work hard enough and you set goals, the opportunities are going to come.”

On the prospects of making a music video with his professional teammates:

“I don’t know if a bunch of grown men are going to want to jump and joke around in a music video.”

On the story that Mrs. O’ Leary’s cow kicked over a lantern that started the Great Chicago Fire of 1871.

“Not much, I better start brushing up on my new home’s history.”

When you need to score in real estate, buying or selling or just in need of some good advice, call Keller Williams’ Colleen Bennett, proud supporter of LaVerneOnline.com Her number is (909) 374-4744.