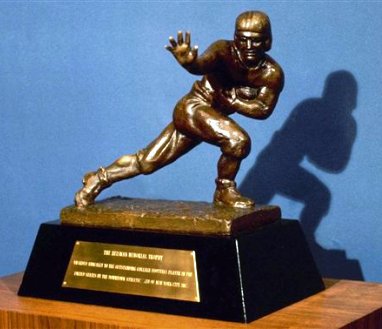 by Brad Eastland, The Sports Philosopher

They’re getting ready to award the Heisman Trophy later this week.   It’s a big deal.   It’s named after John W. Heisman, a crusty, innovative, ancient football coach, whose 1916 Georgia Tech Engineers once squeaked by the Cumberland Bulldogs by the score of 222-0.   It has been won by heroic aviators (Nile Kinnick, who died in his plane during WWII), by sailors turned cowboys (Roger Staubach), by Mormons (Ty Detmer), and murderers (O.J. Simpson).   It has even been won by someone from LaVerne, namely that most legendary of all Army running backs, Glenn “Mister Outside” Davis, who won the award in 1946, and who, before that, attended LaVerne’s own Bonita High School.   Davis’ Heisman can be eyeballed by anyone who wants to, as it sits year-round in a trophy case in Bonita’s main lobby; you should go see it.   Yes, it’s a big deal.   They’ve been handing out these huge bronze paperweights since 1935.   It is widely considered the single greatest accolade in sports.   Not just in football, but in all of sports.

Several reasons.   For one thing, the window is a narrow one.   The trophy goes to the outstanding college football player of the year, and until a recent spate of winning underclassmen broke the spell you usually had to be a senior to win it.   So you get one or two chances, and then suddenly you’re either off to the pros or off working a real job.

Secondly, the packaging is way cool.   They award the Heisman like it’s the Oscars, in a swanky room (at New York’s Downtown Athletic Club before  it was destroyed on 9/11, at several other swanky New York venues after that), with four or five finalists sitting sweating in suits in the front row, with all the living past Heisman winners in attendance (just to add to the suffocating pressure), and finally some guy opens the envelope and reads the winner’s name as if he’s thereby canonizing the young man who has just been elected King Of The World.   And finally, winning the award links you forever with something utterly tangible, namely the coolest-looking trophy with the coolest sounding name.   It just rolls off the tongue:  “The Heisman Trophy”.   Sort of like “The Nobel Prize”, or, as stated, “The Academy Award”.   It is timeless, transcendent praise….

About a thousand chosen media types from Maine to California vote on the award.   You’d think it was a politically-driven national election….which, now that I think of it, it is.   Funny thing; they usually get it right.   The winner is almost always the right guy, and, even if not, he is at least always deserving.   It’s not like the Oscars, or the Most Valuable Player award in baseball, where I could cite you several dozen sad cases of how they got it very, very, dare I say criminally, wrong. (Mickey Cochrane over Lou Gehrig in 1934, Robert Donat over Clark Gable in 1939, DiMaggio over Williams in 1947, Roy Campanella over Willie Mays in 1955, and Ben Kingsley over Peter O’Toole and Dustin Hoffman in 1982 just to rattle off a few irritating examples)   But the Heisman voters almost always get it right.

Last year I think they got it wrong.   Not in a big way, just a little bit.   Oklahoma quarterback Sam Bradford won, narrowly besting Texas signal-caller Colt McCoy.   Not that Bradford didn’t have a great year.   He put up huge numbers, as Oklahoma became the first college team to ever score 60 points in a game five straight times.   Awesome stuff.   But McCoy had awesome stats too.   For one thing, he set the all-time NCAA record for completion percentage, by connecting on a staggering 76.7% of his throws.   And finally—and here’s the kicker—when the lads went head-to-head McCoy’s Longhorns came out on top, with Colt clearly outplaying Sam in that Texas victory.   That mano-a-mano beat-down should have been enough to act as sort of a tiebreaker, and all else being relatively equal McCoy should have edged Bradford for the Heisman.   But Bradford won, largely because McCoy’s Longhorns, who were headed for an undefeated season, a National Championship season, lost a heartbreaker late in the year to Texas Tech, when Tech receiver Michael Crabtree made a spectacular TD catch on the last play of the game to register the upset.   Had Texas gone undefeated and won the National Championship there’s no doubt that McCoy would be hunting his second Heisman this week.

And this is exactly the kind of iron-headed logic employed by people who vote on awards like this that makes me crazy.   It’s like those brain-dead Yankee fans, who claim that their hero Derek Jeter should have beaten out Minnesota Twins catcher Joe Mauer for the MVP award last month.   Just because the Yanks went farther in the playoffs, and, in fact, won it all.   That’s like saying that even though Mauer had a much better year than Jeter, Jeter should have won because Yankee pitchers C.C. Sabathia and Mariano Rivera are much better pitchers than any pitchers on Mauer’s Twins.   Did you follow that?   Yessirree-bob, logic like that makes me want to simply go postal and shoot up a Starbucks or two….

Anyway, the Heisman voters have a chance to correct their misdemeanor from last year.   McCoy is a finalist for the award again, along with Florida quarterback Tim Tebow (the 2007 winner), Stanford running back Toby Gerhart (who went to high school right down the road in nearby Norco, my dear parochial readers), and Alabama running back Mark Ingram.   It’s basically a 4-kid race.

What does the Sports Philosopher think?

Well, that’s today’s problem.   I think the brutish Gerhart— Stanford’s over-achieving battering ram of a back who leads the whole darn nation in both touchdowns, 26, and yards rushing, 1736—has had a truly great season.   McCoy hasn’t had quite the unbelievable year in ’09 that he had in ’08, but still it’s been pretty darn spectacular at times, and, unlike Tebow, his team is still undefeated.

Therein lies the conundrum.   Should the Heisman be considered as was originally intended, an award for one year (which would point to Gerhart), as an award for one epic, late-season, prime-time signature game (which would point to Ingram, who was brilliant in Alabama’s devastating win over top-ranked Florida on Saturday), or should the voters treat it as sort of a touchy feely lifetime achievement award???

Gerhart has had the best year.   He’s simply played the best football, week in and week out.   At times he’s been virtually unstoppable, seemingly carrying whole defenses on his broad back.   He can’t help it if Stanford (little undersized Stanford finished with a respectable 8-4 record, 3rd in the Pac-10 standings) is not nearly as strong or deep a team as Tebow’s heavily-recruited Gators or Ingram’s overwhelming Crimson Tide legions or McCoy’s corn-fed-beef-on-the-hoof Longhorns, any more than Joe Mauer can help it that Sabathia and Rivera pitch for the deep-pockets Yankees rather than his penny-pinching Twins!   I mean should Gerhart be penalized because a large portion of Stanford’s football team is made up of nerdy eggheads in pads???

No he shouldn’t.   But McCoy’s overall career and winning persona are transcendent.   The way the Heisman Trophy itself is transcendent.   The way LaVerne’s favorite son, the late great Glenn Davis himself, finally won the Heisman in ’46, his “worst” season, after having had much better years in ’44 and ’45 and getting screwed in the Heisman voting both times.   Remember, McCoy did get similarly screwed with his pants on last year.   Tough call, sports fans.   Tough call.   Maybe give it to Ingram, he shined brightest on the biggest stage.   No, give it to Toby….he earned it….game after game, yard by yard….

No.   Give it to Colt.   The football gods owe him.   I’ll sleep better.   And somewhere—maybe up in that great big Downtown Athletic Club in the sky—Glenn Davis will once more flash that winning West Point smile.

Brad Eastland is an author, historian, film buff, Heisman Trophy buff, and sports nut, in no particular order.   Brad’s other recent columns for LaVerneOnline can be found in Sports under ‘The Sports Philosopher’ and also in Viewpoint under ‘Brad Eastland’s View’.    Brad has also written four novels and over 20 short-stories.    Samples of Brad’s fiction work can be discovered within the links below :