by Brad Eastland, The Sports Philosopher

My little sister Marji called me the other day, to tell me she was going to the County Fair.   You know, the one right down the road here in Pomona?   Anyway, I told her to make sure to catch a few horse races at their cute little bullring track.   She didn’t.    I told her to make sure to go down the burlap sack slide, that’s always a hoot.   She didn’t.   And she’s not much on livestock viewing or roller coasters or carnivalesque games of chance….Frankly, I’m not quite sure what she was doing there.

Unless, perhaps, she was being dispatched there by Fate to inspire this column.   Because at the County Fair she saw, signing autographs at age 77 with over 200 people waiting patiently in line for the privilege, the great Maury Wills.

Maury Wills.   Full name; Maurice Morning Wills.   Say it.   Sounds sort of musical, huh?   He even played like his name sounded.   One of the most unique, exciting, and historically important players in the filthy-rich history of the Los Angeles Dodgers.   Base stealer deluxe.   Great bunter.   Not a bad hitter, either.   Also an accomplished banjo player.   He was even rumored to have had an intimate romantic relationship with actress Doris Day.   He confirmed it.   She denied it.   Which to me means they probably did it.

Wills is also one of the most important athletes in Eastland family history.   My two brothers and I grew up in suburban Los Angeles in the 60s, and each of us, naturally, cherished his own specially selected favorite baseball player of that time.   Mine was Willie Mays.   Brother Jeff’s was Hank Aaron.   And brother Chris—who, regrettably, contracted whatever disease it is that makes people like the Dodgers—selected Maury Wills.

There was no denying his greatness.   Wills, the catalyst.   Wills, the disrupter.   Wills, number 30 on his back, most skilled of all National League base stealers, able to destroy the equilibrium of an otherwise cool and calm pitcher or manager simply by virtue of his very presence leading off of first base.   Such was the angst and grudging respect he inspired with his ability to steal bases and take control of a close game. 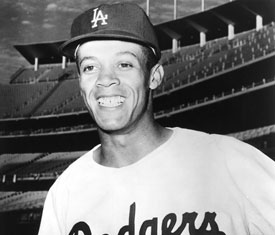 Well, I guess hate is a strong word….no it’s not, I really did hate him.   When I think of all the times he ruined the Giants (my team) by drawing a walk, stealing second, inducing a wild throw to allow him to go to third, and then scoring on a dink or a dribbler or a sac fly it makes me want to climb into my car and dabble in road rage.   He was so incredibly irritating!   And of course every time he successfully plied his trade to run the Giants right into defeat, grinning brother Chris would be right there to rub it in.  (Y’see, he was irritating too.)

Other than Sandy Koufax, Wills was the Dodgers’ most important player in the 60s.   He was the very symbol of the Dodgers’ ability to manufacture runs out of nothing, and win games with pitching and very little else.

Of course the one titanic accomplishment most associated with Wills’ name is the breaking of Ty Cobb’s 47-year-old record for most stolen bases in one season.   The Georgia Peach pilfered an unheard of 96 bags in 1915, but as the 1962 season wore on it became apparent to everyone following baseball that the Dodgers’ twenty-nine-year-old shortstop was really going to make a serious run at eclipsing that mark.   Wills’ pursuit of Cobb’s record was even more notable and significant due to the fact that just one year earlier Roger Maris had eclipsed the greatest single-season record of baseball’s other great Stone-Age icon, Babe Ruth, by hitting 61 home runs.   Baseball was moving into a new Golden Age.   The old records of old icons were falling left and right.

Some of the old folks, of course, didn’t want to see those records fall.   Baseball Commissioner Ford Frick had placed an asterisk next to Maris’ name, because Maris hadn’t hit that 61st home run in ‘61 until after the 154th game of the season, baseball having lengthened its schedule from 154 to 162 games that very year.   (Turns out Frick used to drink with Ruth, and even did the ghostwriting on the Babe’s book.   God, the world is so magnificently corrupt.)

One thing about Frick.   At least he was consistent.   When Wills finally did break Cobb’s record by stealing an absurd 104 bases (more bases than any team stole that year, except the Dodgers of course), Frick placed a similar Maris-like asterisk next to that new record in the record book, because Wills did not get the record-breaking 97th steal until after 154 games were played.   Maybe Frick used to drink with Cobb too….

But his efforts did not go unrewarded.   In recognition of his unprecedented base-stealing feats, Wills did manage to steal the 1962 N.L. Most Valuable Player award from Mays.   Another reason to hate him.

But I love him now.   Heck, I love all the old icons.   Remembering them is the same thing as remembering what it was like to be a kid.

Anyway, it was great to hear—nearly forty years after he stole his last base—that there were still a couple hundred people ready and eager to stand in line on a hot day to get his signature on a piece of paper, and share a few intimate words with him.

Did I say intimate?

‘Just had a thought….I wonder if that other old icon was standing in that line.   You know.   Doris Day.

*Brad Eastland is an author, historian, film buff, Giants fan, and sports nut, in no particular order.   Brad’s other recent columns for LaVerneOnline can be found in Sports under ‘The Sports Philosopher’ and also in Viewpoint under ‘Brad Eastland’s View’.    Brad has also written four novels and over 20 short-stories.    Samples of Brad’s fiction work can be discovered within the links below :