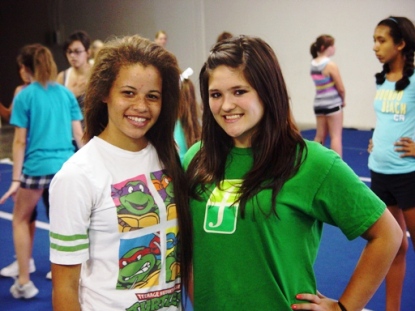 Cruise along Arrow Highway, and admittedly, you’ll pass an industrial string of auto, upholstery, flooring, and other blue-collar shops. But on the farthest fringe of west La Verne, practically behind the mini-mart on the south side of street, is the new home of La Verne Community Cheer (LVCC). What it lacks in ambiance and atmosphere, it more than makes up with spirit, pride and commitment.

Some 80 girls or so call this cavernous 3,000-square-foot former cabinet-making shop home at least twice a week where they learn to cheer, chant, stunt and work to master everything from the splits to back handsprings. The cheerleaders also compete in monthly competitions.

The co-partners/ owners of La Verne Community Cheer, a nonprofit organization, are the mother-daughter team of Danna and Morgan O’Donnell. For years, Danna ran the Pop Warner cheer program. Morgan, who was a member of the Pop Warner cheer team and many others, cheered for four years at Bonita High School, including her senior year, 2008, when she was captain. She, along with her staff, is credentialed through the American Association of Cheerleading Coaches & Administrators (AACCA) and the National Council for Spirit Safety Education (NCSSE). 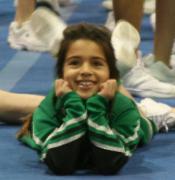 At one time, Danna and Morgan’s cheer program was offered through La Verne extensive recreational offerings, but when the city decided it no longer wanted to offer a competition-based program, Danna and Morgan branched off to form their own venture. The most challenging aspect of their new enterprise has not been finding members, but finding a facility large and spacious enough to accommodate all the running, jumping and tumbling.

“We searched Pomona, San Dimas, Claremont, but this is the only space we could find that had at least 45 feet between poles and was at least 18 feet high,” Danna said.

The location might be far from ideal, but the inventive and creative duo is making it work. With the start of school, they’ve seen their roster swell with several new members, including their newest and youngest, Samantha Mandala, who turns four on Sept. 17. 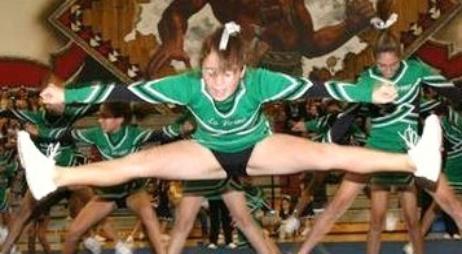 “We were attracted to the program because it takes a mentoring approach,” said Samantha’s father, Chris. “The older girls help with the younger children and teach them to be responsible citizens. They help develop them into outgoing young people, and as a nonprofit, they try to keep the cost down.”

Monthly membership fees are $45. For a second child, a parent pays just $20. Comparable cheer programs can run $2,000 to $3,000 a year, Danna said. Fees go toward paying the coaches, utilities, insurances and their $3,000 a month rent, which Danna calls a bargain.

“Samantha came in really shy, but after 10 minutes she was really loving it,” Chris added. “Now she keeps asking me, ‘What day is it?’ and telling me, ‘I think I have cheer tonight.’” 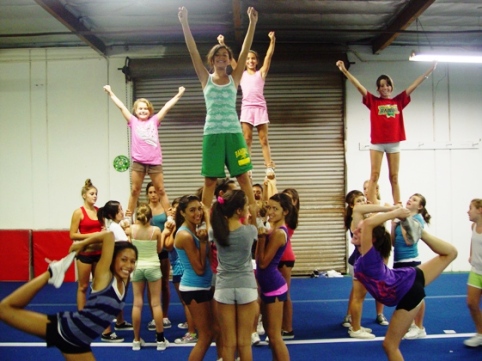 LVCC boasts three all-star teams for which the girls try out in May. Two teams are age-appropriate and the top squad is based strictly on talent.

Whether you want to learn the skill of cheerleading, be part of our community performance team or compete with our National Champion teams, La Verne Cheer has a place on our squad for each girl,” Danna added.

With the season under way, Head Coach Morgan is busy choreographing competition routines for the girls. As they master one routine, she will layer on another level of difficulty.

“I base the routines on what a team likes, as well as their favorite music,” said Morgan, who currently attends Mt. SAC during the day where she is taking business and health classes.

September and October are Morgan’s busiest months because she is choreographing and teaching new routines to six different classes. “In November, it starts getting easier on me because by then the cheerleaders already know the routines. I just have to make sure every phase is clean, and they’re doing it the right way.

“This is pretty much my life.”

It’s a good life, though. Morgan feels she’s helping teach her students many of life’s essentials. “Cheer really gives you a sense of responsibility,” Morgan said. “The older girls have to watch what they say and what they do because they’re always being watched by the little girls, and the little girls learn from watching the big girls.

“It teaches them a lot about leadership, and, of course, body control.”

Another coach, Alyssa Ocampo has been with the program over a decade, starting and starring with Morgan as Pop Warner cheerleaders. “I’m here almost every day,” said the Claremont High School senior who is also on her school’s hip-hop squad. “I like it so much, I don’t think I could ever leave.

Coach Beverly Famous, a Bonita sophomore, joined the La Verne Community Cheer program in 2005. Besides coaching and attending Bonita, she’s also taking night classes so she can graduate early and begin attending cosmetology school toward her goal of becoming a stylist and designer.

“When I started here, I was really shy,” said Famous. “I don’t think I talked for two months. Then I started making more friends.” Now she coaches two teams. “It’s a fun thing to do to help the girls progress with their social skills and choreography,” she added.

Meanwhile, in the same building Danna has used her pageant connections to form a modeling school, which, over a dozen weeks, teaches young girls the ABCs of modeling, with classes on make-up, styling, posture, walking and how to build not only a modeling portfolio but also confidence, self-esteem, self-image and poise.

“There is really nothing in the area that captures all this,” said Danna, who during the day is a contracts administrator for Goodrich Hoist and Winch, a Diamond Bar-based company that outfits helicopters with vital rescue equipment, which has been put to work during the recent fires. 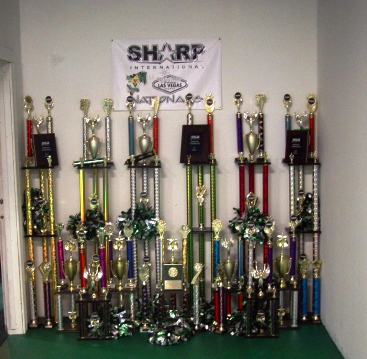 The 12-week series of classes is $200. Profits from these classes are designed to help offset the cost of running the La Verne Community Cheer program.

The state of California has been helping Danna navigate the various rules and regulations that all new businesses face. In addition, her parents have helped improve the facility. One parent contributed rows of lockers so the girls can safely store their equipment and valuables during practice. Other parents serve as tutors to help girls with their academics and gate monitors to ensure the area is safe at all times.

“By everyone working together, we’re figuring out a way to make this all work,” Danna. “We’re moving forward every day.” 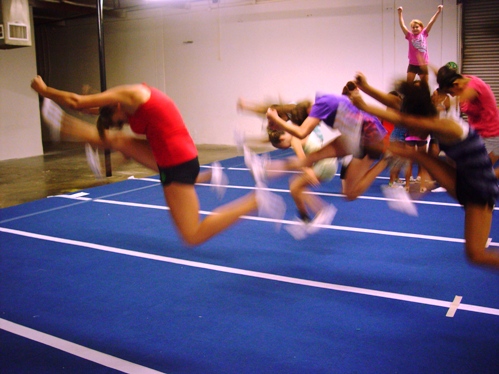 At La Verne Community Cheer, there is always a blur of activities.