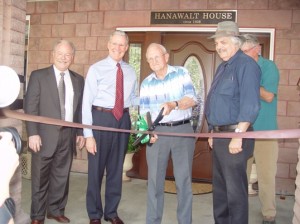 Hanawalt family representative J.Clair Hanawalt cuts the ribbon symbolizing the reopening of the Hanwalt House, once the home of W.C. Hanawalt, the University of La Verne's 5th president.

W.C. Handy (1873-1958) was known as the “Father of the Blues,” W.C. Fields (1880 – 1946) was known as a pioneering comic genius, and W.C. Hanawalt, a contemporary of Handy’s and Field’s, was best known as the University of La Verne’s fifth president. (Only then the University was known as Lordsburg College.) His name also graces the “Hanawalt House,” which was rededicated on May 6, after a fire in late 2004 charred the house almost to its foundation.

But yesterday the home was as grand as ever beaming brightly in the afternoon sunshine serenaded by a string quartet and shaded by the suddenly lush leafiness of camphor trees, a fitting tribute for one of the town’s true pioneers. 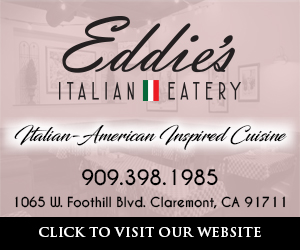 Like W.C. Fields, W.C. Handy hailed from Pennsylvania, where he was a school superintendent. Hearing how the hotel-turned college had fallen on hard times, Handy headed west to mount a rescue mission. He revitalized the institution, and befitting his presidency, he began work on a handsome house across the street from the college with help from his half-brothers Russell, Ross and Harvey, who had also moved west.

Unceremoniously, the College trustees, to whom W.C. reported, asked the Church of the Brethren to oversee the institution at the expiration of Hanawalt’s six-year lease in 1908. Hanawalt resigned his position, rented out the house that had just been completed and moved away to farm and serve as a federal loan appraiser. He also remarried after the passing of his first wife. In 1945, some 37 years later, Hanawalt moved back into the house with his wife Pearl, living there until he died in 1953. The  Pennsylvania transplant proved you can you can come home again, or at least back to La Verne.

Now the Hanawalt House is the more-than-100-year-old jewel of the University, and the new home of its Alumni Relations and Special Events departments.

Architecturally, the house features Queen Anne and Eastlake elements, but it’s really the history that rolls up to its porch and out the back into a lovely garden that it’s important. Like town I.W. Lord, Hanawalt was an entrepreneur who sensed opportunity in the small hamlet. From such humble ambitions great things have grown, and the Hanawalt House teaches that lesson to each who passes by.